Just over one week ago was the summer version of one of my favorite events. That event is the giant flea market known as The Northwest Largest Garage Sale. While I have tough wants, and don't ever bring back any earth shattering goodies lately. I do always seem to bring a few things back that fit nicely into the hobby room. 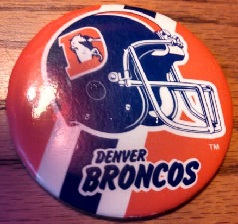 Finding this at the everything is one dollar person I couldn't pass it up. Being a Broncos fan I figured at some point an idea would pop into the head of what to do with it. Over the past week I've come up with something that needs tested. If it works this button will have some friends to go with it in the future as a wall display. 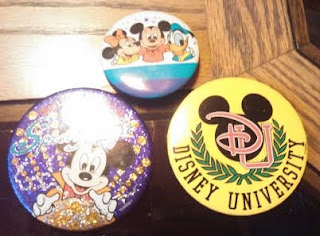 My second find of the show was more buttons, but of the Disney variety. Only costing 25 cents each I thought why not bring them along. We have been planning for quite some time to do some Disney related pictures, posters, and other items around the living room. The wife has been wondering why these seem to follow me home every so often. I've always wanted to do some display of them, and odds are that day is coming close. All that needs to happen is the Broncos button idea needs to work, and finally the reason I've been gathering these will be discovered. 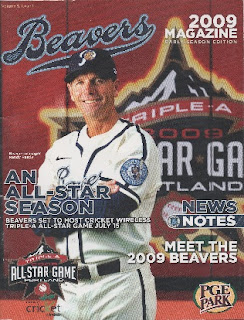 The last treasure was this 2009 Portland Beavers magazine. When I picked it up there was no price anywhere. What followed next was the usual price question which was met with what are you willing to offer. Not wanting to insult them, but get it on the cheap I went with two dollars. He accepted, and I am now the proud owner of this magazine. Honestly I don't know what I want to do with it after I eventually give it a good reading. If all else fails, and I decide it should find a new home there are Padres fans out there someplace that it'll end up with. Until then it'll make a stop here waiting for a good reading.

Overall it wasn't a bad show as I did find a few things that were worth the time. Leaving I learned that there is a reason I go to these things at opening. The line of cars coming in was insane, and something I didn't have to deal with due to the early arrival. Seeing it only cemented the fact that whenever I go to any show, arriving early is always the best plan.
Posted by The Prowling Cat at 7:19 PM