On The Way Home From The Garage Sale

As I made the way back home from the few finds at the show. Stop after stop at the Goodwill's along the way home yielded zero results. It wasn't until the final stop of the day I was able to add baseball cards for the first time in a very long time.

Remembering that the card shop in Salem hadn't had a visit from the cat in a few months. I felt it was time to stop in, and see if his 2015 singles were stocked with all the cards I haven't been buying packs of this year. 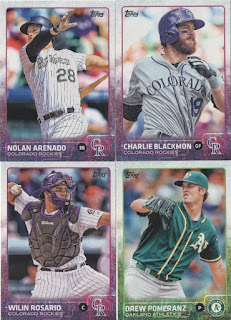 The first additions were cards for my personal collecting.While Arenado, and Rosario are obvious, and  on my player collections list. Pomeranz, and Blackmon aren't on the list currently. Why I bought the Pomeranz, and Rosario cards are a mystery as odds are after this year neither will be players I actively collect. All that will be addressed in December, or when I decide to do the post addressing my players collection. 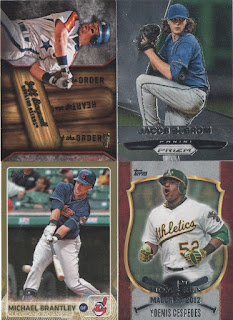 Next was this batch of cards that I figured would either find a home with some fellow blogger, or bloggers. When I bought them all, but one I had an idea of who to possibly send them to. If you'd like to beat me to the punch just tell which one, two, three, or all four you want with a comment. I can be real slow in sending cards out sometimes so they won't be gone for atleast a few weeks, or knowing me months. 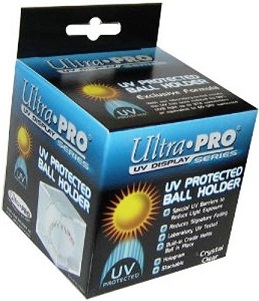 Closing out my purchasing, and the reason I didn't have more cards than the eight was two of the ball cubes like the one above. Deciding to go the route of display cases for some of the league balls instead of the pack lottery. I felt like it would be wiser to spend the money on something I can use rather than luck.

It was a nice way to end the trip by hitting a card shop again. So far it has held me over, and won't hopefully be the last time I see cards for a few more months. If all goes as planned I want to hit the show at Mall 205 this month. Who knows if it will happen as it does coincide with the daughter's birthday weekend.
Posted by The Prowling Cat at 4:15 PM