#Kylecard Goes To A No-No

On Sunday I wanted to head down to Eugene, and catch an Emeralds game. The original promotion that interested me was the Garage Sale. Things changed though when on Friday I saw that the promotion had changed to 'Remembering Civic Stadium'. For those that keep up with this blog you know that Civic Stadium was the old home of the Emeralds that was burned to the ground recently.

Wanting to hit a ballgame more than anything I thought why not, and decided to hit the game despite the change. Little did I know that I'd be seeing Emeralds history when the night was over. 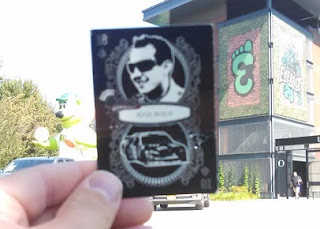 When we went to the July 4th game I had Kylecard, but didn't take any pictures. This time I couldn't let him miss out on this game, and some photo ops. 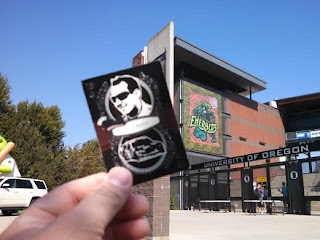 These first two pictures were from outside the gates waiting to get into the game. While the crowd was decent sized during the game, you wouldn't have thought by seeing the empty view here. 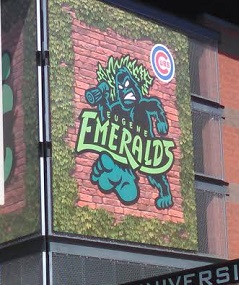 I had to take a little closer view of the Bigfoot logo as I just love the look of this logo.

Besides the garage sale thing still going on, the Civic Stadium tribute, the Ems offer one dollar hot dogs on Sundays. Getting something to eat, and a drink was my top priority before deciding what to do next. 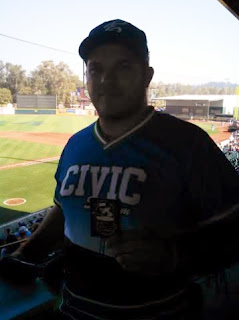 As I sat in my seat I noticed one of the staff wearing one of the jersey's the Ems would be wearing for the game. Opportunity struck as the information booth was slow, and I went in to see if he'd show off the jersey with Kylecard. Sorry it isn't be best picture, and honestly it frustrated me beyond belief to get this picture. For some reason the phone camera just wouldn't flash, and so I had to lighten this picture to get it to look this good. During the game they had a silent auction for the jersey's that were worn by the players.

As for the game itself, I had to work the next day. Due to this I thought maybe getting to see half the game would be my fate. As things got going though, I started to notice very few walks, and a pace that was flowing along. Eugene added a run to go up 1-0 as things just kept going. 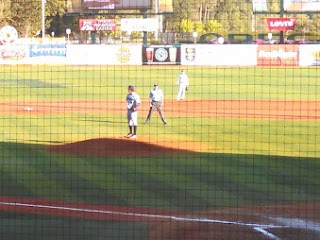 Things really got interesting to me when Everett brought in Adam Moore. At the time I didn't put it together right off the bat, but that changed, and in a hurry. Moore was one of if not the star pitcher for the Oregon State Beavers. Throw in that he grew up in Eugene, and what you had was a crowd that turned on its home team. For the innings that Moore pitched it was like a home game for the Aquasox when in the outfield.

With all this going on I'm not sure how many noticed, but it wasn't lost on me. As the Ems added two runs to go up 3-0 I noticed that the Sox still hadn't gotten a hit. Then came the top of the ninth, and still no hits for the visitors. This game had an amazing flow that only took barely over two hours to complete. When all was said, and done four Emeralds pitchers had a no hitter. This ended up being the fifth no hitter in the teams history of 60 years.

Ironically the teams last no hit gem was in 1968, and was the year before moving into Civic Stadium. It was an amazing experience that I'm glad something told me to go despite the garage sale promotion actually taking a back seat. While they still did the garage sale, all it basically was is old team card sets that I had zero interest in. Getting to see a no hitter from a team that hadn't had another in your lifetime was simply amazing.

Odds are this will be my last game this season in Eugene unless a miracle happens. I'd like to go on the 29th, but I think we will end up doing my company picnic instead. The game features a Mike Schmidt bobblehead, and I'd love to bag one for the collection. Even if I don't catch another game Kylecard has something huge in his future next month.
Posted by The Prowling Cat at 8:59 PM