For the cat it was doing the Black Friday thing followed by getting the Christmas lights up on the house. To make that happen required some serious work in the garage. Throw in the huge project of working on trying to get all the schedules for trade up on the other blog site. A project that is going well, and is possibly close to 75% done.

The Mariners were even busier as they got them a Cyber Monday deal. A new player that the team was tied to last season. 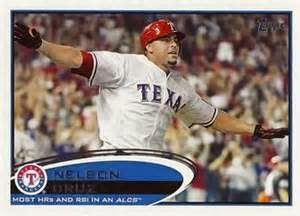 If he shows the power that has become a trademark the last few years. This will be a move that will gain some serious wins for the team. Gone will be the chance to avoid Cano in close games. With Cruz in the next spot you might be best pitching to Cano. Having this help I believe will lead to a big year for Cano.

Interestingly I believe this won't be the last we hear from the Mariners. Yes, the team has now gotten the bat they have hoped for. Despite the huge addition there are still some gaps still needing fixed. I'm not going to say that the team will make another huge splash like the one today.

They will make another move or two for an outfielder. If that player is a big name then look out for the Mariners this upcoming season. If that player is a lesser known name this team might still be trouble for the AL west. The biggest news of all this is Seattle might finally start becoming a serious threat for years to come.

The years of players taking less money to play elsewhere could be ending. Cano's contract last season could be what has started this new trend. Having a superstar like Cano coming let people know that Seattle was no longer the unwanted kid anymore. Now all that is left will be seeing if the team can do something with all this new found ability to get stars in town.
Posted by The Prowling Cat at 1:00 PM