Looking outside, and seeing all the snow around here has still been an interesting sight. Then we started to watch some NFL. As we flipped to the FOX game the screen was white from the snow coming down during the Eagles versus Lions game. Despite not being fans of either team, but wanting to see how things would go the channel surfing stopped there. The sight was so interesting even the wife who hates the NFL has been hooked. This watching got me talking to her about the snowplow game between the Miami Dolphins, and New England Patriots. 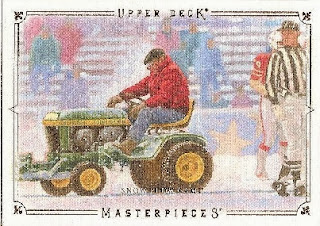 (2008 Masterpieces card. picture from an E-Bay search)
Remembering the game, and wanting to make sure I wasn't talking crazy. I did a quick search on information about the game. What I learned is that the game was played December 12th 1982. While I couldn't remember the exact date I nailed it on the other facts. At the time I was twelve years old, and really into football. For memories sake, and those who weren't born.
The game was played at Foxborough with heavy snow coming down all game. At the time snowplows were used to clear yard markers during the game. Late in the fourth quarter New England was setting up for a field goal for the first points of the game. With a break happening the Patriots coach ordered the snowplow operator to clear a spot for his kicker. Driving out the operator veered from the yard markers, and quickly plowed an area directly in front of the goal posts for the Patriots kicker.  Despite protests from the Dolphins the officials allowed the kick to happen which ended up being good, and winning the game 3-0. 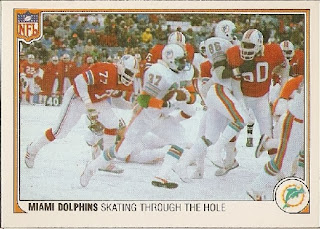 (1983 Dolphins Fleer action team card)
The card above came out the very next year. I'm not sure if the game information is across the back or if another card exists with information about this game. I do remember as a kid hearing about the game from a football card. As kids we were really into football cards, and baseball was an afterthought. Cards like the one above were some of my favorites. One of these days soon I'm going to do some research, and make some wantlists for all these sets. Until then I'll just see cards like this one, and remember having them as a kid.

Ending the snowplow game story. If you have been watching any of the snow covered games today you will notice one change. All yard marking is done using snow shovels now due to this game. I believe the idea is if they are shoveling they can't do a quick turn, and clear a section. Teams can do it themselves by kicking snow around, but no using shovels.
Posted by The Prowling Cat at 12:30 PM