With the snowstorm we had on Friday it seems like this blog has turned into a constant reminder of that very storm. While I would like to apologize for this happening. There is a reason for all this writing about the snow. Some years snow like this would annoy the crap out of me. Only for some reason this year has been a different story. I'm not sure if it is the getting older, and this snowstorm has brought back memories of snow as a kid. Snow is very rare in this part of the state, and getting both this much, and at this time of year is even rarer.

Making the trip to, and from work on Friday. Then going out on Sunday to do a couple errands around town allowed me to sharpen my driving skills in the snow. Something I haven't done in probably ten years or more. While we have gotten snow in those ten years I usually use the snow as an excuse to take the day off from work. Throw in that while I trust myself to drive in this weather its the guys in their 4x4's driving at normal speed that makes me nervous.

The amount that fell on Friday is more than has fallen in those ten years though. That has helped in me embracing all the white on the ground. It brings back the times of going too wherever we could to go sledding. A distance that got even bigger when I got a drivers license, and my own car. It brings back all the times we used to go outside, and play football in the snow. If you never got to play football in the snow you don't know what you missed. It had to be the most fun playing football I ever had. The only downside was you'd get cold faster so the game ended quicker than usual.

The playing football in the snow is where the idea for this post is coming from. While there might be a ton more of these cards out there. I am going to sharpen my detective work, and see if I can give you information on the game pictured.. Today you get to see five cards from games played in the snow. All five cards came from an e-bay search. So you know up front I don't own any of these cards, but I'd love to one day. 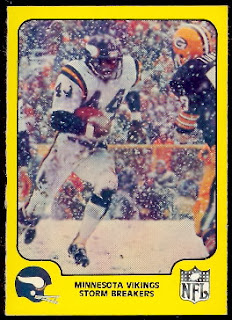 The game played in swirling snow at Lambeau Field with 56,267 in attendance ended as a low scoring affair. Ending with the Vikings winning 13-6, and all 19 points scored in the first half. Green Bay started the game by scoring first off a David Whitehurst three yard run. The extra point failed leaving the score at 6-0 at the end of the first quarter. On the first play of the second quarter Sammy White scored on a 40 yard pass play to put Minnesota ahead for good after the extra point. Later in the quarter Minnesota added two field goals of 21 yards, and then 31 yards to end the scoring. With the loss Green Bay was 2-9, and would finish the season 4-10 for last place in the division. Minnesota would run their record to 7-3 finishing the season 9-5, and in first place in the division. 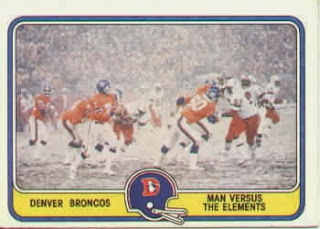 I will start by saying this card took a little more homework than any other card in this post. The card is a 1981 card, but Denver, and New England played too early in 1980 for a snow game. This led to a search in 1979, and what I feel is the game this card came from. Denver would start the game strong by scoring 24 points in the first quarter to go up 24-0. The Patriots would add a touchdown in the second, but give up two more to trail 38-7 at halftime. Adding a 42 yard field goal in the third New England went into the fourth quarter down 38-10. Denver added a three yard touchdown run by Rob Lytle to finish the scoring, and win 45-10. The game would leave New England 7-4, and become one of the reasons the team would miss the playoffs. Denver's record went to 8-3, and would help them win the wildcard spot. Their season would end in the wildcard game against Houston 13-7. 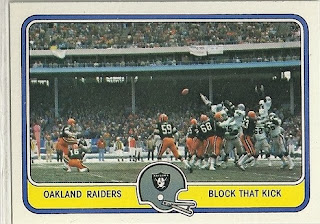 In what would be the coldest game since the 1967 Ice Bowl, with a temperature of 4 degrees. The game would have a wild start consisting of punts, and an interception for both teams. Still late into the second quarter there wouldn't be any scoring until Cleveland's, Ron Bolton would return an interception for a 42 yard touchdown. Ted Hendrick's blocked the extra point to set the score at 6-0. Hendrick's block was the inspiration for this very card. Oakland finally got on the board with 18 seconds left in the half. The extra point was good as the teams went into the half with Oakland up 7-6. The third quarter would belong to the Browns as they added two field goals, and missing a third to lead 12-7 going into the fourth quarter. It wouldn't take long for Oakland to take the lead as Chester scored on a 27 yard pass to go up 14-12. With 49 seconds left in the game, and the ball at the 14. Cleveland's quarterback was told if no one was wide open to throw the ball into the stands. Instead Sipe would throw an interception in the end zone, and end Cleveland's season. Oakland would go on to defeat San Diego in the Conference Championship. Followed by a Super Bowl win over the Philadelphia Eagles 27-10. 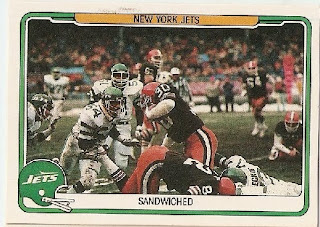 In a low scoring game that  showed the effects of snow. New York scored first to go up 7-0 off a Lam Jones touchdown catch. Cleveland countered with a field goal to go down 7-3. Before going into the half New York added another touchdown to lead 14-3. A slow third quarter ended with Cleveland adding a touchdown off a eight yard Calvin Hill catch to trail 14-10. Early in the fourth Matt Bahr kicked another field goal for Cleveland to trail, and end the scoring 14-13. Cleveland would end the game 5-10, and miss the playoffs. New York's record would raise to 9-5 on their way to the playoffs where they would lose the wildcard game against Buffalo 31-27. 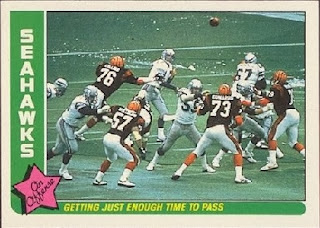 In a game dominated by the Seahawks from the start. Seattle would score a touchdown in the first, and one in the second to take a 14-0 lead. Cincinnati would add a field goal followed by a Seattle field goal for a 17-3 halftime score. The third would end with only a Bengals field goal for a 17-6 score. Seattle would finish the game strong with a safety, and a Zachary Dixon one yard touchdown run for a 26-6 final score. The game would leave Cincinnati 4-8 for the season. Seattle would become 10-2, and looking strong going into the playoffs. A wildcard win against the Los Angeles Raiders 13-7 would be followed with a 31-10 loss against the Miami Dolphins in the division game.

Seeing what appears to be snowballs in the background I did a little more research. Five years, and just less than a month later the same two teams would be playing again in Cincinnati. After what the fans perceived as a bad call they started throwing snowballs at both the Seahawks, and officials. This led to the famous Sam Wyche speech insulting the teams state rivals the Cleveland Browns.
" Will the next person that sees ANYBODY throw anything onto this field, point 'em out...and get 'em out of here - you don't live in Cleveland, you live in Cincinnati!"

Hopefully I got all these games right or I'll have to work a little harder on the detective skills.
Posted by The Prowling Cat at 1:15 PM