Starting off 2013 I did something for this blog that I normally don't do. That thing was creating some goals for not only this blog, but my collecting. Some of these goals were set with the idea that they could be achieved with a little work. Others were set with the idea that it would take a good sized commitment to reach them. The strange thing is when everything is all said, and done the goals I thought might be easy are still sitting undone. While more progress was made on some of the tougher goals. Its amazing how that happens sometimes.


1- Make over 200 posts for the year.
When I thought about doing this goal the idea was it would be much tougher than it actually was. I was just over one month into blogging, and thought that dreaming up ideas to hit this might be a tough one.  As the year got going I started to see that 200 wasn't going to be near enough of a goal. In July when I did the halfway point update this goal was well within sight. By November I had nailed it down, and was looking to see how far over this goal it'd be.
10/10

2- Reach 33 followers.
You ever have one of those things that later on down the road you ask why did I do that? This goal is one of those things for me. Being this blog had just started the idea of getting as many followers as possible was high on my list. Not long into the year it hit me that this was one of those goals that just didn't matter. I personally followed a few blogs when starting out. That all changed quickly as i started going down the blogroll, and reading the posts I find interesting. I prefer going to the actual blogs site rather than reading the posts the way they are presented in the dashboard. Going down the blogroll is just easier to me, and something that currently works. There are tons of posts I will read daily from blogs I'm not following. This has led my current attitude, and that is my focus should be more on putting blogs on the blogs I read list. This will help find some of those awesome blogs out there that aren't on the blogroll, and therefore get missed by me. For the sake of this goal though.
10/10

3- Finish 5 sets or subsets of baseball cards.
Starting the year out I knew that I had some easy to hit sets, and some tough if not nearly impossible sets to hit. With those two thoughts running through my head I came up with five sets or subsets. Part of me thought that this goal would get hit by mid to late in the year, and I might be able to drop one to two extra. The reality is I started of real strong by completing two sets in one of my first trades as a blogger. From there I added a whole new batch of sets, and subsets to complete as the year moved forward. Even with these new wants it wasn't until going into a local card shop late in the year that set three was finished. Sadly this was the last completed set for 2013, but it won't slow me down in 2014.
6/10 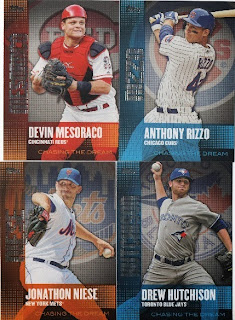 4- Complete 24 trades of baseball cards.
While I didn't keep a running total I believe this goal was easily achieved. By the halfway point of the year I think this was accomplished. Despite that the trading didn't slow down as I kept things going up until the very end of 2013. As everyone can agree this has to be one of the top goals you'd want to achieve as trading is a good share of the fun when it comes to collecting.

5- Improve my artwork for the artelopes
Both the daughter, and myself made great strides in our artwork on these. There were times when we had the creative juices flowing, and did some very memorable envelopes. Other times we were lacking or just didn't have the ability to run with an idea. Overall these have been fun to do, and are something I'm looking forward to doing more of when baseball starts up once again. Until then we have a few that still need finished up, and sent out to a couple bowl games, and a couple hockey teams.

6- Get all three of my hobbies organized
One of the biggest goals for myself was this goal. If you've been reading my posts you know about the three hobbies. For those that haven't been around as long. Besides the baseball card hobby I collect business cards, and pocket schedules. The main business card collection has been attempting to collect a business card from every baseball team. The third collection of pocket schedules blends in nicely with the business cards. Starting the year off the business cards were in good shape. The baseball cards, and pocket schedules were in complete disorganization.
Ending the year the business cards are still looking good, and actually getting even more fine tuned than at the start of 2013. Baseball cards are still a work in progress, but made great strides. The two biggest areas needing work were getting the sets together, and the player collections. Each time I traded for a missing card you'd have to send a search party to find where I'd placed the incomplete set. This is still a problem on some sets, but is getting way better. When it comes to players I need to get the Nolan Ryan collection put together instead of total chaos like it currently is. Pocket schedules were kind of the ignored hobby in this organization. Currently there is a batch of stuff in a shoebox that need to be put in pages. 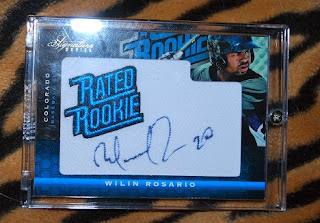 7- Get an autograph card of all my favorite players
Of all the goals this is the one where I failed the most. In all fairness it is the goal I expected to get the least accomplished with. Coming into the year I had the serious collections of Nolan Ryan, and Mark Teixeira. A group of around seven players were added, and most have been tossed to the wayside. When the year was over I whittled the list down to the current four players. Don't be surprised if sometime in 2014 the list falls down to two players with those two being Wilin Rosario, and Mike Trout. Keeping with the theme of those seven players being the cards I needed autos from. Only one card was added, and that is the card shown above. Even though I didn't do well on this goal the one card I did get was a great addition.

8- Improve my writing
From a personal side I believe that I made great strides in the writing department. While I can, and will hopefully continue to improve. There are still many things I need to work on. The one thing that the wife got me doing is that on most posts I will proofread before posting. There are times this doesn't happen, and sometimes it means the posts isn't as great as it could be.

9- Half my baseball business card wants

This was one of those I am so glad to have nailed down easily. With the help of the artelopes project the wantlist for baseball business cards took a serious hit. We sent out a real sweet looking envelope to the Washington Nationals, and after years of trying got a card. The Nationals were my last holdout for MLB teams so getting their card had me feeling like a little kid on Christmas. From there the holdouts continued to send me cards, and by seasons end had the remaining list at only a few teams in the Appalachian League, and a couple independent league teams. Luck was so much on my side that 2/3 of the remaining teams were completed.
10/10

10- Get more involved in the blogging scene
Out of all the goals set this was a very important goal to me. Sadly I failed at reaching the idea behind this goal. I wanted to comment on blogs atleast 52 times during the year. Speaking for myself I appreciate it when readers take the time to comment about any post. Seeing a comment in my mind says that what I wrote spoke to that person enough that they took the time to let me know. During the year there were so many great posts written that spoke to me, and deserved a comment. Instead I let the procrastinator in me say we will do it later, and never did. If there is anything I need to work on personally outside of blogging the procrastinating would be that. Even with that I still managed to do around 20 something comments so it wasn't a total loss.

Summing up I give myself a 68/100 total for my goals. In the end it was maybe five to ten points lower than I had hoped for. When most these goals were set the plan was to have some decent level goals, and some that would be impossible to achieve. I'm a warped soul like that. By mixing in some tough, but realistic goals it keeps me motivated. If all the goals can be accomplished then at some point in the year there is nothing to shoot for. Good thing I did this as some goals were even easier than I thought they would be, and accomplished faster than I ever imagined. While this was a success if you ask me I am currently not sure if I will do goals for 2014 or just go with the flow.
Posted by The Prowling Cat at 6:34 PM