We've all heard the phrase that the U.S. Postal Service always delivers right? Well around here we found that that isn't always the truth. While they did deliver during the snow we had that isn't where this title comes from. On Tuesday the news had a segment about mail problems in my town. It seems that one of the seasonal employees decided to steal any envelopes that appeared to contain cash. When he was arrested they found hundreds of letters in his possession. What led to this discovery I don't really know. From stories they found out though, and set up a sting which this idiot walked right into by stealing the intended letter. The good news for me is that one letter wasn't intercepted, and that letter was from 'The Junior Junkie'.

Not more than a couple weeks ago it was Griffey Jr.'s birthday. To celebrate the junkie offered up two cards from a set of pictures he put up on his blog. Willing to celebrate the career of a player who had some great years up here in the Northwest I took him up on the offer, and got some sweet cards. 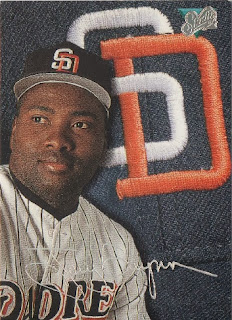 While I am not either a Gwynn collector or building this set. I am a fan of logo's, and was a sucker for that big SD on what looks to be a hat sitting behind Gwynn.  Adding into the thought of getting this cards was who knows. Maybe one day I will add this set into the list of cards I'm looking for. Until then this Gwynn will be the lone card. 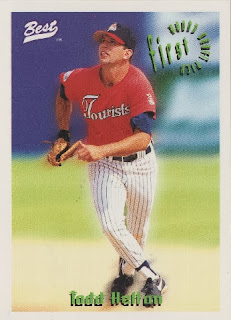 This second card actually hits two spots in my wheelhouse. While I'm not a Helton collector I do love the Rockies. From reading this blog you might think I was more of a Mariners. The truth is the Rockies are number one, and the Mariners come second. Just living close to Seattle means I get more Mariners news, and access to Mariners collectibles. Secondly I have always been a fan of the minor league sets, and this card is minor league. So how could I not get this card? 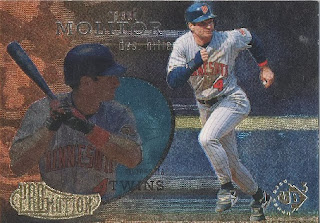 Junkie tossed in a third card on his own to make this an even sweeter deal. While the scan doesn't do this card justice. It is a good looking card that I am thrilled to have.

Want to toss out a huge thanks to 'The Junior Junkie' once more, and give a late birthday congrats to Junior even if he won't see this.
Posted by The Prowling Cat at 9:41 AM