Included in the bubble mailer from Larry was some real fun little items that had to get a second posting. The big one was this picture which honestly I'm using to increase the post views for today. 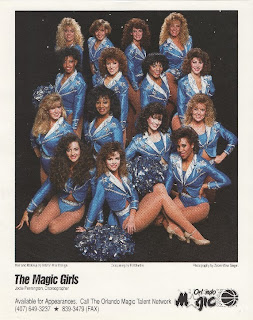 Now if a picture full of the Orlando Magic Girls doesn't increase traffic to this site today then I don't know what will. A little detective work has me believing that this is the 1990-1991 dance team. I say this because Larry was kind enough to include a schedules, and a team picture of the 1990-1991 Orlando Magic. 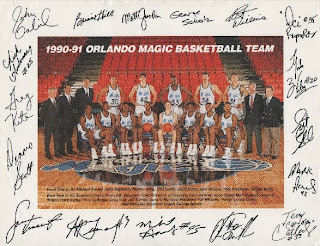 Included as well was some Stuff. If you didn't notice I capitalized Stuff as before getting this great package I never realized what Stuff was. I always thought stuff was well.... Stuff. I never knew that Stuff is, or was the mascot for the Orlando Magic. 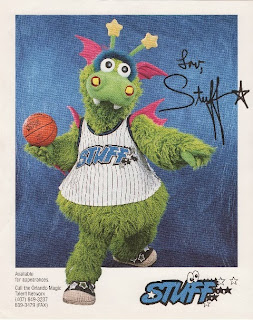 What this thing is I will never know. There are just some mascots in all the sports that leave you scratching your head. Stuff is one of those for me. 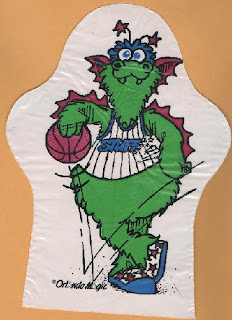 Despite not knowing what he is this hand puppet, glove, or whatever you want to call it was a pretty cool treasure. It is also the last Orlando Magic goodie in the mailer. It all reminded me of the short time the Magic were one of those teams I enjoyed watching. Something about that Shaquille O'Neal guy just made me like the team while he was there. Basketball has always been one of those weird sports for me. While I always come back to the Utah Jazz as my favorite team. I seem to go through spurts where my favorite team will change from time to time.Must be the fact that I'm not really that big of a fan of the sport so my team loyalty isn't really set like with the the other sports. 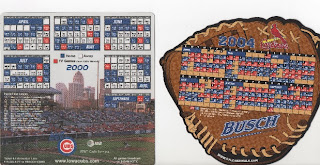 Finishing off this fantastic mailer was a sport I can get behind. While I'm only showing two magnets Larry included three different magnets. Not only did he send three magnets he sent magnets that will be making it on the wall in the hobby room. All that is missing is a magnetic board to stick them on. While it might take some time to find the board one day I'll find it, and these will be the first magnets to go on that board.

Closing out this treasure trove of goodies I'm going to give another shout out to Larry's blog 'My 2008 Topps Set Blog'. Go, and check it out as Larry writes about more than just the one set who's name is in the name. He's a Diamondback fan so it's a great place to see how things are going for his team during the season.
Posted by The Prowling Cat at 2:30 PM