Up here in the part of the Northwest we live in snow is a very rare occurrence.  Today was one of those rare times. Not only did it snow, but we got somewhere between four to six inches minimum. Driving to, and from work was a real experience as it's a 15 to 20 mile drive one way. The morning part was the real adventure as I leave early enough that I was part of the first cars on the road. The return trip was just slow going with nothing too exciting. Growing up in Utah means I know how to drive in the snow it's just avoiding the idiots who don't, and drive to fast. 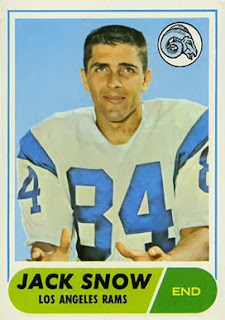 (all cards courtesy of an internet search)

In honor of the snow I thought why not show off cards of players named snow. To fill in with a little more why not learn, and share some information about these players as well. Jack Snow played wide receiver for the Los Angeles Rams from 1965 through 1975. The 8th overall pick by the Minnesota Vikings, shortly afterwards Jack was traded to the Rams. During his career in Los Angeles, Jack caught 340 passes for 6012 yards, and 45 touchdowns. After retiring Jack spent time as the receivers coach in 1982, and later a Rams analyst. When the team made the move to St. Louis Jack was one of the very few that went with the team. Sadly it would be short lived as Jack died in 2005 from a staph infection. 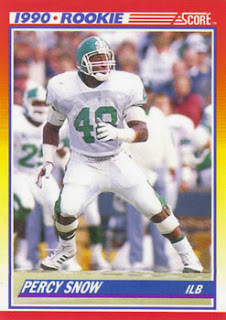 A great college linebacker at Michigan State, Percy never made it in the NFL. Drafted 13th overall by the Chiefs in 1990. Percy played his last game in 1993 for the Chicago Bears. Injured in 1991 during training camp while riding a scooter. The injury was the factor in Percy's career downslide as he never fully recovered from the injury. Percy's career stats were a lowly 40 games, with 2 sacks, and one interception. 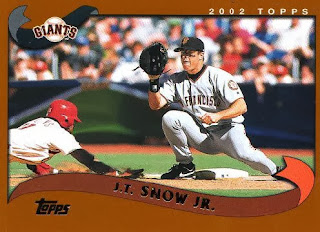 The son of football player Jack Snow. J.T. was known for his great defense over a thirteen, and a half season career. Originally drafted by the New York Yankees who J.T. played only one season for. J.T. was traded to the Angels followed by the Giants where he spent the bulk of his career. Next came a one year stop in Boston, followed by a return to San Fransisco where he ended his career. Winning six gold gloves J.T. also  batted .268 with 189 home runs, and 877 RBI's.
Posted by The Prowling Cat at 9:23 PM