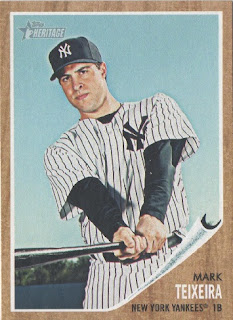 One of my biggest flaws is I have the attention span of a gnat sometimes. This flaw has haunted me throughout life, and still haunts me to this very day. The parts of life where it hits me the most is in getting things done around the house, and my hobbies. This past weekend it hit me in both as I was attempting to do some organizing in the hobby room.

On Saturday we made the short trip into town as the wife was working again, and needed the daughter and myself to get some groceries that were on sale. Not willing to turn down a chance to visit the Goodwill I was all for this trip. The daughter was in as well being she's been looking for a dress to use for Halloween. Her plan is to dress as Mother Nature, and getting a cool dress on the cheap for her costume has been driving her nuts. So going through the store I saw something that I should have bought, but let the daughter talk me out of. This is the reason for the post title. They had a baseball card binder that had probably thirty or so pages inside. Most the pages seemed like they were in rough shape, and that is why she was able to talk me out of the purchase. The thing only cost three dollars, and has been haunting me ever since. Binders alone cost more than that so even if I could have saved five pages it was a sweet deal, and one I messed up by not taking advantage of.

Fast forward to Sunday afternoon. The NASCAR race that I was torn about even watching got hit with a rain delay. Throw in that they were going to be showing the Broncos versus Giants in a few hours. I had some spare time to attempt getting something done around the house. With the daughter being stuck to doing her chores of cleaning her bedroom, and bathroom. I felt motivated to get some organizing in the hobby room done. Things started well as I got a few of the shelves reorganized. The bobblehead collection is looking way better now with them all organized on four shelves. That is when the gnat attention span started to set in. My brain started wandering, and wanted to play with baseball cards, and pocket schedules. This wasn't a terrible thing as getting baseball cards organized is part of the hobby room cleaning. So deciding where to start I put the last couple trades in their respectable spots.

This has been something that has been going great for awhile now. Since getting most my sets in order I have been adding new stuff in their place more sooner than later for the most part. I do have some sets that I can't seem to remember their location so the cards for them are all on one box together so when everything is perfect I'll be able to add them no problem.

My next idea was to get my Mark Teixeira collection in order. This was were things went south, and in a hurry. I located one of my stacks of Teixeira cards that need to be put in the album. Then started to figure out which cards went where. As I got a few cards in I reached under the table for a nine pocket page, and.... Well Sheet! I have six pocket pages, I have two pocket pages, I even have four pocket pages, but no nine. I sat there for a moment thinking about that binder at Goodwill just a day earlier. Able to scrounge up a page or two from another binder. My gnat attention span set in, and organizing was done. If I had only bought those pages....
Posted by The Prowling Cat at 2:00 PM