Now that a busy week is over it's time for the weekend, and some fun. While I have no idea what is on the agenda for today what I do know is it's time for another showing of cards from the business card collection. 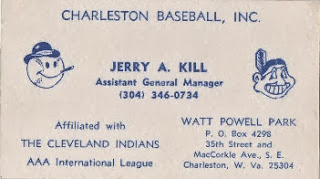 The Charleston Charlies played in the International League from 1971-1983. Only affiliated with the Indians from 1981-1983 which is the time frame this card comes from. Leaving Charleston in 1984 the team moved to Old Orchard Beach where the team became the Maine Guides. For the next few years Charleston would be without baseball until 1988 when a new franchise in the lower South Atlantic League would move to town. The current team known as the West Virginia Power still play as a Pirates affiliate. 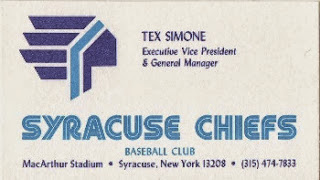 The current run of the Chiefs name has been used in the International League since 1961. Coming into the league as an affiliate of the Minnesota Twins. The team bounced from affiliate to affiliate until 1978 when the team signed with the Toronot Blue Jays. This affiliation would last until 2008. 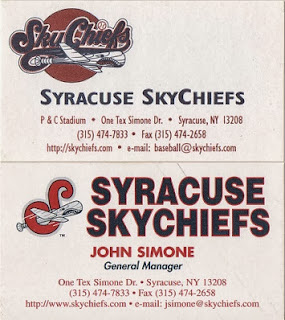 For a few years during the time frame of 1997-2006 the team went to the name SkyChiefs. While I can't say with certainty the name change came as a way to drop the Indian reference. 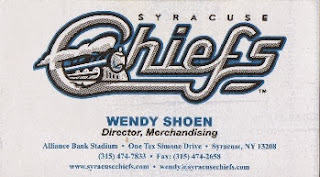 Going back to the name Chiefs in 2006 the team came up with a much friendlier logo featuring the train currently used. In 2008 another change would come as the team would change from the Blue Jays to the Washington Nationals affiliate. The relationship with the Nationals still continues today. 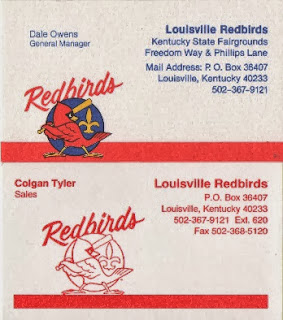 Formed in 1982 as the St. Louis Cardinals relocated their triple A team to Louisville. The move proved to be very successful as the team set all sorts of attendance records. Even becoming the first ever minor league team to top one million fans in a single season. The relationship was such a success that at the time there was talks of a MLB being placed in the city. As we all know the team never came, but triple A baseball kept going. 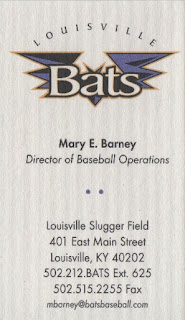 The Cardinals relationship ended in 1998 as the team changed to a Brewers affiliate. Along with the change came a new name as well to the RiverBats. Both changes would be short-lived as the Brewers relationship would last only two seasons before the team would sign with the Reds. Then after four years as the Louisville RiverBats the name would be shortened to just Bats in 2002. The new name, and logo are references to the Louisville Slugger bat maker.

Posted by The Prowling Cat at 8:18 AM