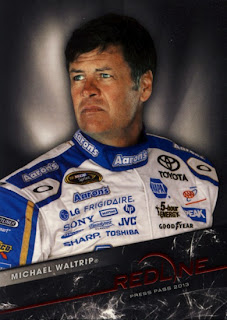 Being the huge NASCAR fan that we are in the cathouse I have to chime in on this. Today NAPA announced that it will no longer be sponsoring cars for MWR. This after the whole mess from Richmond just under two weeks ago. Personally I am sad to hear that NAPA felt the pressure to go this route. Hopefully they will be the only sponsor to drop this great up, and coming team.

The saddest part is this could be the first nail in the coffin for this team, and it's a shame. If more sponsors cave to the same pressure NAPA did NASCAR will be losing what was on the verge of being one of its top teams. MWR has been knocking on the top of being an elite team with a passionate owner, and great sponsors. This season NASCAR took some serious hits as the amount of teams has been slowly dwindling. There have been a few weeks where they only had 43 cars show up so everyone raced. There have even been some cars for the top teams race with no sponsorship.

To lose a sponsor like NAPA is devastating to a team like MWR. Another loss will be what I feel are the best commercials in NASCAR. MWR seems to always be part of the best commercials shown during races, and the NAPA commercials topped the list. Both groups played off each others strengths in the commercials, and next year that will be lost. 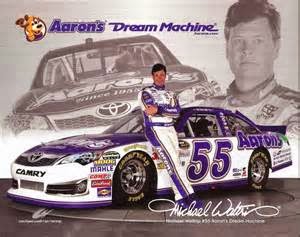 All this stems from what I feel was an over-reaction on the part of NASCAR. While they believed that Bowyer spun on purpose they couldn't prove anything. So instead they went after something they could prove, and that was Vickers pitting to give up his spot. The most brutal part of that situation is it's something done all the time in NASCAR. Joey Logano was given a spot by another racer who just moved over. No punishment, yet the team committed the same crime as MWR. Heck they are still allowing teams to slide over, and let someone lead a lap for a point. A point that once it's given can't be taken back. A situation that has happened numerous times all season, but I guess it's not allowed during the Richmond race.

Now due to the over-reaction NASCAR is on the verge of crippling a team that is great for the sport. While the money punishment was huge. The biggest hits are the car they eliminated from the chase which cost the team another 1-4 million dollars. While it might be late to secure full sponsorship for 2014 hopefully MWR survives this bump.

As a fan of Kyle Busch I hope MWR's remaining sponsors learn from his situation. After his meltdown in the truck race at Texas on 2011. There was talk at the time of Joe Gibbs Racing either losing all the sponsors related with Kyle or Kyle being forced out. In the end only one sponsor wanted off of the car, and that sponsor has been the loser in the entire deal. The ones who stayed have reaped the benefits of Kyle running good, and getting them tons of television time showing his car. The one who left has fallen into oblivion on its new car where they are barely seen on television. While there were behind the scene punishments the sponsors stayed. Hopefully MWR gets the same results as these sponsors will benefit from staying put if you ask me.

More than anything I just want to see MWR weather this storm, and survive. As I've said a few times, and will say one last time. It's a great team with an even better ownership which would be a huge loss to NASCAR. Heck, when all this happened he admitted to the pitting to try, and get his driver in the chase. I can't think of too many other owners who would have admitted to this. I could be wrong, but I highly doubt it. That alone shows the man is honest, and unfortunately crossed an imaginary line that every team crosses constantly. The other owner who got caught went into total denial, and as I said walked away not only unpunished but got rewarded. Then they wonder why the sport is struggling right now. Could be the way they dish out punishments, and rewards as they please.
Posted by The Prowling Cat at 4:41 PM