After only making one post last weekend this one should be much better when it comes to showing the business cards. If you didn't read any of my posts this week. We made a last second run over to the coast for the night last Saturday. This didn't give me a chance to write up a Sunday post so we only got the one batch of cards. This weekend my plans consist of running errands today, and watching college football. Sunday will be watching the NASCAR race, and with all the crap going on I don't know why. Not getting to big into that whole ordeal, but you can say right now I am so pissed at NASCAR. After all the events last weekend they released a statement saying they wouldn't deal with what if's or could have been's. Then Friday they put Jeff Gordon in the chase based on a what if or could have been. Way to stick to your guns... Anyways lets see some business cards shall we? 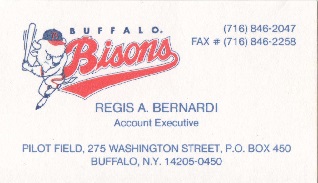 The Bisons name has a history in Buffalo going back to the late 1800's. Playing in various leagues, and having stints of teams, and then no teams in Buffalo. The current franchise dates to 1979 as a team in the Double A Eastern League. In 1985 the team joined the American Association until the league's demise in 1997. Joining the International League which it has been a member of ever since. During the years the team has made seven affiliate changes. These changes have occurred with five different teams during this time. The longest run being with the Cleveland Indians from 1995 until 2008. 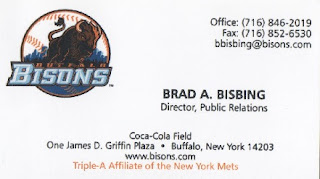 After the 2008 season the team announced a brand new affiliation, and team logo. The logo shown on the card above added the new affiliate New York Mets colors, and a skyline. Personally this is the best of all the Bisons logo's if you ask me. The buffalo with the city skyline has a good look, and is way better than the batting buffalo in my opinion. This relationship would be short-lived though as the team didn't do well for the four years as a Mets affiliate. During the 2009-2012 seasons the team had losing records in three of the seasons, and attendance took a huge dip.

In 2013 the team signed with it's closest MLB team the Toronto Blue Jays. Sadly I was unable to get a new business card this season to show the teams new look, and affiliation. This means I have something to shoot for next year unless one drops in my lap through other means before next season. The team went back to the batting buffalo logo, but with new colors. While the team didn't make the playoffs this season it did end with a winning record of 74-70 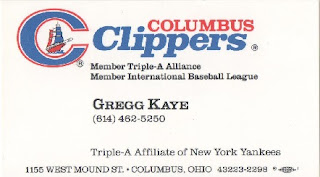 Founded in 1977 as an affiliate of the Pittsburgh Pirates which was very short-lived. The team changed to the New York Yankees in 1979. During its time with the Yankees the franchise had tons of greats come though its ranks. Much like its MLB team the Clippers were winning Championships by the handful. Playing in 10 different Championships, and winning 7 of the 10. 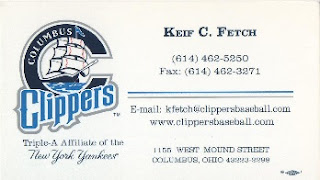 The relationship between the two lasted for 28 years before coming to an end in 2006. Two years with the Washington Nationals followed the Yankees era. Both seasons did not end well with the team going 64-80 in 2007. The following season the team didn't fair much better going 69-73. 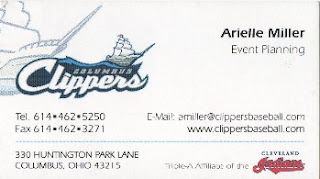 Deciding a change had to be made the franchise signed a contract to affiliate itself with the Cleveland Indians in 2009. The contract which has been renewed now runs through 2014, and has yielded two Championships already in 2010 and 2011. 2013 wasn't the teams best year as they finished nine games back of Indianapolis with a 71-73 record.
Posted by The Prowling Cat at 6:38 AM