I Didn't Know These Were In There

The title for this post is exactly what was going through my mind Sunday night. To know what led to this we have to go through the entire story. On Friday night the local Boys and Girls Club held their first monthly dance. Last year these became a staple for the daughter as it's more of a chance to hang with friends, and listen to loud music. Part of the fun though is they always have a theme with this one being the 80's. Being the first dance she talked us into having her friend stay the night so they could do each others hair before going. After leaving the wife asked me what was with the hair to which I told her about the dances theme. Her answer was "well they nailed it!" Sadly if I had known about this post I'd have taken a picture, but I didn't so instead you get an 80's Madonna which odds are was the inspiration for my daughter's hair. 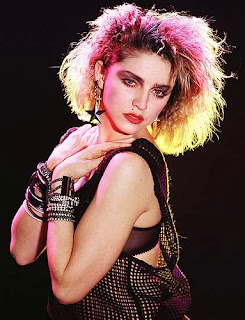 After the dance it was late so the girls came home, and headed for bed not long afterwards. Saturday came with a ton of possibilities as the Beavers were in San Diego, and the Ducks on a bye week. This meant that the freeway wouldn't be crazy with fans all heading to the game. With this opportunity we discussed what we could do with the day. Both girls have been on this kick of wanting to find all the parts for their Halloween costumes. Despite being just over a month away they have been driving me insane whenever they get together as they want to have their costumes finished.

She does this as a few years ago I decided that the price of costumes were way over the top. Paying 30 dollars for something everyone else is wearing so that you can get five dollars worth of candy. The entire thing seemed insane to me so that year I offered her ten dollars in candy to skip the whole thing or come up with something not everyone was wearing. Thinking she would just say "ok, I'll take the candy" she stunned me, and took the challenge dressing as a vampire cheerleader. This sparked her creativity, and is something she has looked forward to each Halloween. Due to this offer Goodwill each year around this time has become her best friend. Wanting to get the costume done we all agreed to head up north to the Goodwill hoping it would have a better selection that our closer store. It turns out I was right as she found the dress she has been looking for to start the outfit. Leaving she noticed a shell necklace, and wanted one. Many years ago her grandfather went to Hawaii, and brought me back one so I offered it up.

This moves us to Sunday night. On Saturday I agreed to look for it Sunday evening after everything died down. In the garage I have four bins full of things that haven't seen the light of day in years. Mostly its pewter, glass, and wood castles as I once collected these, and showed them off in nice cases around the house. When the daughter was born they all got put away, and the cases given away as I didn't want her hurt by breaking the glass or breaking any of the castles. Going through a couple moves since I divorced her mother, they have still sat in the bins waiting for me to decide their fate. Not only is there castles, but other odds, and ends as well. Some of these are magazines or other Nolan Ryan items that I keep not knowing what to do with.

Inside one of these bins was supposed to be the necklace we were wanting. Going through the first bin we found  a box that holds other necklaces I had long forgotten about. We enjoyed seeing what was in there, but moved on quickly as it wasn't our end goal. A second, and third bins didn't reveal much more than the castles I knew were in them. The sad part is some had to be thrown away as they have been seriously damaged by all the moves. The fourth bin revealed the most as the daughter dug to the bottom. Reaching in she came up with a stack of cards that led to the quote, and post title. "I didn't know these were in there". 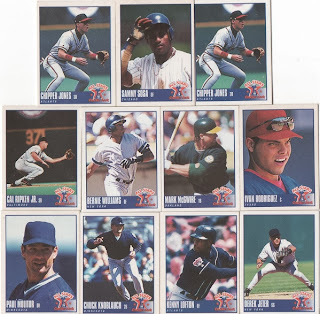 These are the 1997 Cracker Jack minis. The little prizes you get from inside a box of Cracker Jacks.  Two things about these cards caught me off guard. First is these cards come from a time frame I wasn't collecting baseball cards. I wasn't even remotely interested in baseball cards, and had no thoughts of ever collecting again. So how they survived the few times I have gone through that bin, and were still inside is incredible. You would think that they would have been trashed at some point.

The second thing that caught me off guard is I've never been a fan of Cracker Jacks. I liked the peanuts in them the few times I did eat them, but as for the caramel popcorn. I just never really did get into that part of them. So how did I end up with eleven cards from boxes of Cracker Jack?. All from a time frame that I wasn't even slightly interested in baseball cards. Talk about a mystery that will never be answered.

Besides the baseball cards I found a few more cards that I knew about, but had long forgotten.

All these came from a football game I had bought years ago.This is another case of not knowing what happened to everything. I have these three cards, and I believe a couple Broncos in a box with my baseball cards. What happened to the game along with the remaining cards is another mystery. I do know I kept these cards as I had heard of these three guys. The other cards I had no clue about.

So after going through all four bins we never did find the necklace that started all this. As I've said a few times these bins have gone through alot. I believe I know where the necklace ended up. A place where its never to be seen again. I doubt the person who ended up with it even has it anymore. The small container it was in had something else they wanted. So the necklace was an afterthought that odds are ended up getting tossed aside. The good news is the daughter, and myself had a good time going through the bins. She did find a sword ring that she is in love with so for her it wasn't a total loss.
Posted by The Prowling Cat at 2:30 PM