Today we start the tour through my business card collection for minor league teams. If you followed the MLB cards you saw in the last post that I was going to try something new with the minors. The big change will be that instead of listing the team it will be the city, and all cards related to the city. The next new thing you will see is that I have a couple business cards related to the International League. This won't be a common occurrence as I don't have a card from each league's President. When I do though we will feature those so you can learn a little about the league. So lets get to business shall we? 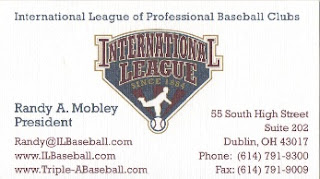 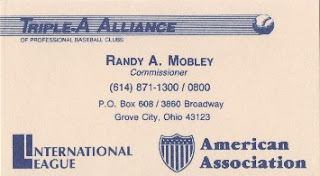 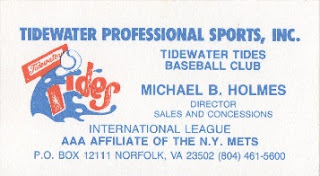 Originally members of the High A level South Atlantic League from 1961 and 1962. The ownership pulled the team out of Norfolk at the end of 1962. The city wouldn't be without a team for long as a local group convinced the expanding High A level Carolina League to grant the team a new franchise. The team would stay in the league until 1968. Then in 1969 the New York Mets decided to relocate their triple A affiliate from Jacksonville to Norfolk. Keeping the name of the Tidewater Tides which would remain until 1992. 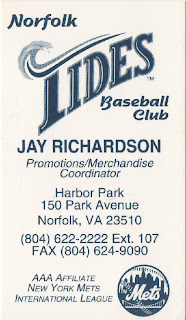 Moving into a new ballpark in 1993 the team changed its name from the Tidewater Tides to the Norfolk Tides. The city of Norfolk had financed the park so it was only natural that the team change its name out of respect for the city. The team would continue as a Mets affiliate until 2007 when a new team took over. 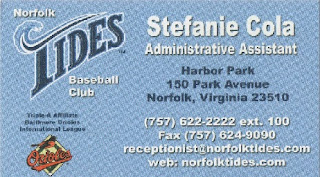 At the end of 2006 the Tides ended what was a 38 year relationship with the New York Mets. Signing a contract to become an affiliate of the Baltimore Orioles starting in 2007. This affiliation should run for many years being the team is currently owned by Maryland Baseball Holding LLC. The company owns two other Orioles affiliates as well in the Bowie Baysox, and Frederick Keys.

Hopefully you enjoyed this look at the International League, and Tidewater-Norfolk Tides. As I said before, this is a work in progress. I tried to share information about the league, and team with the business cards as eye candy. If there is another way you would like to see this information presented feel free to let me know as I'm more than willing to experiment to make these posts the best they can be. There are a ton of teams in the minors, and independent leagues. All those teams means these posts will be running for a very long time. So any ideas to keep them interesting I'm all for.
Posted by The Prowling Cat at 6:00 AM