With this only being Sunday I have already had a crazy weekend. All the activities is the reason that this is the first, and only showing of business cards for the weekend. The great part of being so busy is if I can think of how to do the write ups. There are two posts that should be coming from these last two days. Until then I am going to share three new towns worth of baseball business cards. 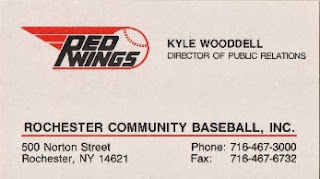 Baseball in Rochester, and the International League dates back to the 1800's. It wasn't until 1929 when the Red Wings started their first MLB affiliation. The team was the St. Louis Cardinals who became owners of both the team, and stadium they played in. During the 1940's some slim years followed with the Cardinals announcing the team would cease operations, and both the stadium and team were for sale. A group with the plan to sell stocks in the team, and make the public Rochester's new owners was formed. Successful in their move the team is now owned by the Red Wings fans much like the NFL Green Bay Packers. Despite the new ownership the Cardinals would remain affiliated with Rochester until the end of 1960 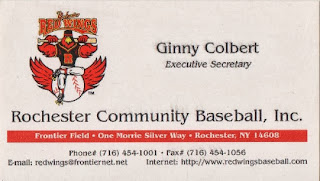 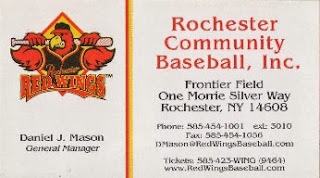 Signing with the Minnesota Twins at the end of 2002. The team started its current affiliation at the start of the 2003 season. To date the team has had a rollercoaster ten years with the Twins. This season ending just short of making the International League playoffs. 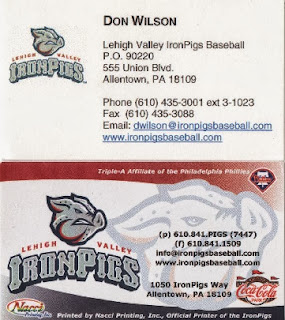 A new team since the start of the 2008 season. The IronPigs were originally the Ottawa Lynx who relocated to Allentown after the 2007 season. This move almost didn't happen, and wouldn't have if not for the failure of Harrisburg to update its stadium to Triple A baseball standards. Allentown stepped up to the plate by building a new stadium. The stadium Coca-Cola Park opened in 2008 with the arrival of the IronPigs. Since arriving in Allentown the IronPigs have been an affiliate of the Philadelphia Phillies. 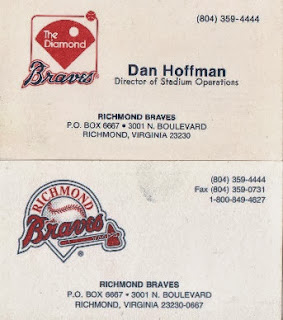 Created in 1966 as the Triple A affiliate for the Atlanta Braves. The team would play in Richmond until their relocation to Gwinnett in 2009. The move would come after years of trying to get a new stadium, but with no results. Despite an online petition by the fans of Richmond the team would move to Gwinnett who had built the team a new stadium. 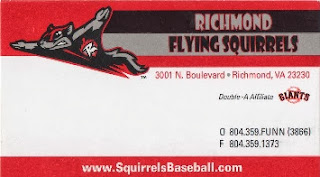 Richmond wouldn't remain without a team for long as in 2010 the San Fransisco Giants came calling. The team looking for a new home for its Double A Eastern League franchise which was relocating from Connecticut moved into town. The new team known as the Flying Squirrels was chosen during a name the team contest. Even with the new franchise Richmond is still haunted by the desire for a new stadium. Since their move into town the Flying Squirrels have been working on a new stadium for the teams games.
Posted by The Prowling Cat at 6:00 AM