When I think Of Dairy Queen I Think Of Cards?

For the last month I have been exercising, and trying to lose weight. I think I'd be doing better if I fully committed, and not just partially committed. Part of this entire thing is cutting out my night-time ice cream which is the brutal part. I have started to eat other things that have alot less calories, and on some nights after my working out don't feel the desire for anything. I've been so good that the wife had bought me a thing of ice cream which sat around for so long I let the daughter, and her friend eat it. 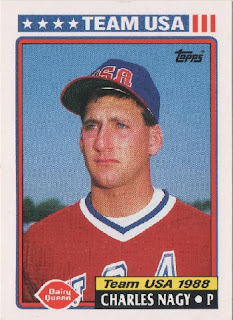 This is what is leading to this post. I thought if I am not eating ice cream I can atleast show some cards that are related to one of my favorite snacks. 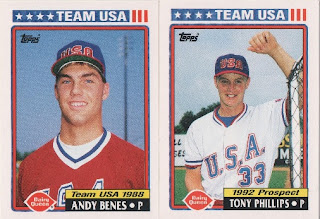 While I am finding other vices that taste just as good such as yogurt, and those low calorie pudding snacks. Every so often I find the ice cream calling. I've been good, and only had two small helpings instead of the usual large. That's pretty good for a month though I would think. 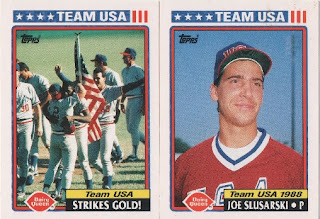 Helping me in this quest now is that the wife has gotten the idea, and has stopped buying ice cream for me. She has really started to bear down, and limited how much she buys altogether. When she does buy it's at a real good price, and she only buys one for the daughter. Give me a few months, and hopefully the craving for ice cream will be gone. Until then I guess its do everything possible to limit the damage. 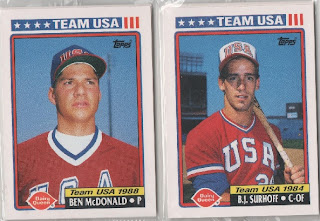 Oh Yeah! About the baseball cards. Dairy Queen put out team USA baseball cards in 1992. I believe you got a three card pack with each purchase of a peanut buster parfait. Once completed the set was 33 cards consisting of players who played on the team from various years. I only got a small sampling of these packs as I'm not a huge fan of the parfait you had to buy in order to get them. Lucky for me I had a girlfriend at the time so she ate them when I did which limited the damage.
Posted by The Prowling Cat at 2:00 PM