I'm not sure how many times I've said this in this blog, but the Rockies are my team. While I enjoy the Mariners, and at times seem like a bigger Mariners fan. When it all comes down to picking one team the Rockies are it. On the surface you might think otherwise, but a deeper look would make it obvious. With that in mind I was filled with excitement when a co-worker mentioned he was going to visit family in Oklahoma. Specifically he was going to Tulsa, home of the Rockies double A affiliate the Tulsa Drillers. Every few years he makes this trip, and brought me back some sweet items last visit. One of those was a newspaper feature about the new stadium. 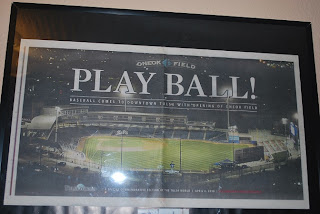 This time things were different as he mentioned going to see the Drillers play before the trip. Knowing about the game gave me a chance to put in a request ahead of time. The meat of this request was for a t-shirt to show off my Rockies fandom. 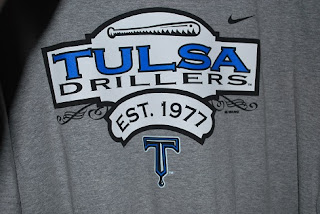 Besides the awesome shirt he nailed it again with other goodies he got from the game.Starting things off were my usual requested schedules. Each season the Drillers have two different covers, with multiple sponsors for each schedule. These are a new cover and sponsors, unknown until I got them Wednesday. 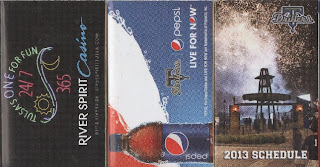 He's also has heard me talk about schedules before, and how sometimes magnetic schedules can be like gold. Knowing this he managed to get a magnet for my collection, and one for me to trade. 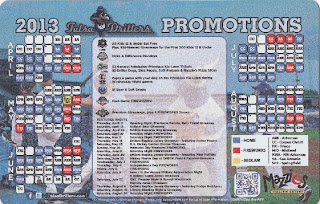 Finishing off this bag of treasures he brought two copies of the Drillers Gameday Magazine. 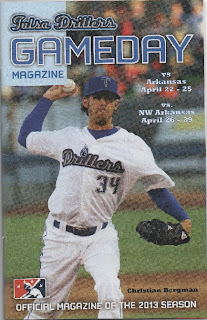 Personally I always enjoy going through these magazines. It's a great way to get a little feel on what is currently going on with the team. I've gotten them in Eugene before games a few times, and realize they are mostly sponsor stuff. If you read farther though these magazines can contain some interesting nuggets. One of the facts contained was something I hadn't even realized until my co-worker mentioned it. Tulsa has a player from just up north in Salem who played for the Oregon State Beavers, Joey Wong. I knew he played for Oregon State, but missed that he was in the Rockies organization so this was a cool surprise. Now I just need to take the time, and read it myself.
Posted by The Prowling Cat at 3:58 PM