May Has Been Just Brutal

Living up here in the Northwest is plain brutal this time of the year. While we have two top ranked college baseball teams in Oregon, and Oregon State. While they are running rough-shot over the PAC12. The choices to keep track of the team are listen to radio broadcasts, catch the very few games until this weekend on the PAC12 Network, or pay the inflated prices to watch them play in person. Being I'm not filthy rich, and we have a huge vacation coming up. The watching them play in person option has been a non option. Most games rival the cost of a MLB game in ticket prices. That is if you can even catch someone selling tickets as Craigslist is full of people looking for tickets.

Our major league choice if you want to even call it that is the Seattle Mariners. While we did go watch them play last month they recently are a mess, and confusing at the same time. I understand the sending Jesus Montero down, but did they need to destroy the guy while they were at it? The Mariners webpage showed nothing but pictures of his screwing up. Nice way to keep it classy Seattle! Maybe a shot of him at in his gear, and saying he had some stuff to work on, but pretty much blaming him for this current losing streak was Seattle's method. Then they wonder why no superstar wants to sign a contract, and play up in Seattle. Well I'm going to go the route that should have been taken, and drop a good looking Montero card on you. 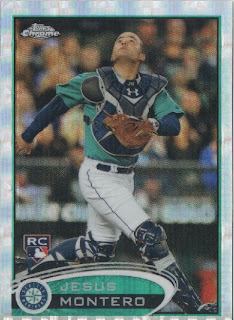 While I could do an entire post on the recent Mariners stuff, and probably should. I'm going to head back in the direction planned. Something they might want to try at some point.


The worst part about May is other than those two options we have no baseball. While the other parts of the country bask in baseball glory watching their minor leaguers. Here in the Northwest we live in baseball poverty. In just ten days everything will change as baseball is back, and in a big way. It all starts with the Corvallis Knights who start on June 4th. 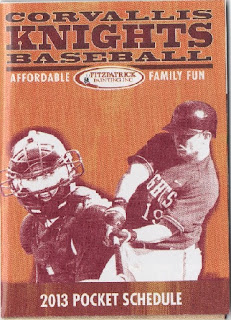 Corvallis is a member of the West Coast League. They are a college wood bat league that play their games at Oregon State Beavers baseball field. For those that don't know here is how it works. The players are all still in college, and get paid very little so they can keep their college eligibility. More than anything they still get to play baseball, and show MLB teams what they can do when playing with wood bats instead of aluminum. There are leagues all around the country, and something you should check out. It's very affordable, and sometimes top notch college guys can be found on local teams. We can see games here for five bucks, and watch a good game in great seats.

June gets even better mid month as finally the single A teams start up. With the Yakima teams moving to Hillsboro we now have three options all within a couple hours at most. The plan is to maybe catch a Sunday game or two in Hillsboro, but most the watching is the Eugene Emeralds. How many games we see for them is still unknown, but we usually drop in for atleast one. I'm interested in going down south to see them as they have a new logo this season. What other changes are going with this has got me wanting to see them more sooner than later. The last option which is the Salem-Keizer Volcanoes odds are won't happen. This team is probably the most un-fan friendly team I have ever seen. The only reason we ever go is for their great nachos, and those haven't been enough to draw us in the last couple years. 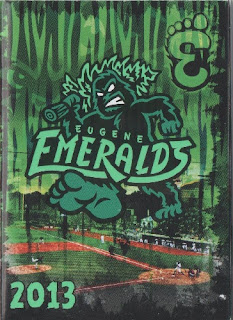 While I won't get to see opening for any of these teams due to vacation. I'm getting some excitement going as baseball is about to be back. Until then I guess it's suffer for a few more weeks waiting for some baseball fun.
Posted by The Prowling Cat at 8:25 AM