My usual Monday run into town was a quicker trip this week as we have been trying to do some cleaning. The plan is for a hopeful garage sale this upcoming Memorial Day weekend. To make this happen we have been working extra hard to try, and see if there are items we don't use. While I've had some bins full of item for a couple years as we planned to do one last year, but never got around to it. This is the perfect time to see what other goodies we can live without. Monday it was me tackling the garage while the wife was at work, and the daughter at school. Going through the bins of things I've collected over the years I came across this little treasure. 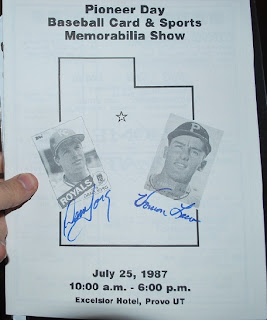 Seeing this little whatever you want to call it got the memories flowing. I lived south of where the show was located by approximately 25 miles. Small towns is what you had with Provo not exactly being that big at the time. Far as I knew this was the first ever card show for the area. I do know that this was the first ever card show I'd been to until we moved north to Oregon. Adding to the coolness was this show was right before my birthday, and added to why I got to do this show.

Being almost seventeen, and not knowing a ton about baseball. Only what I had self taught by watching games on television. Having two former baseball players signing autographs was just the coolest. I remember showing up at the opening time so I wouldn't risk missing out on seeing these two players, and getting their signatures.

While it's obviously a simple book that was done on a copier I was thrilled to get it, and read the interesting information on both players. 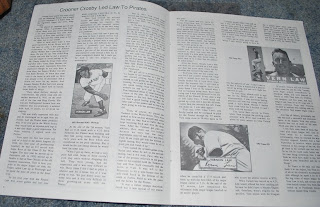 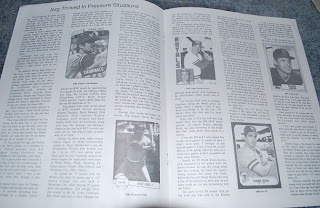 Another fun tidbit was the history of cards pages where it gave you two pages worth of history on where the baseball card was, and how it came to its current point. 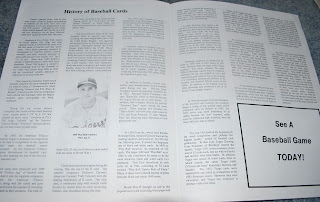 Finishing up is something that if you think about it is kind of strange. 'So You Want To Collect Trading Cards?' Seems pretty irrelevant if you ask me. I am at a card show, and you want to ask me if I'm interested in collecting cards? Looking closer though reveals that it gets into the different approaches you can take towards collecting. The article breaks down the idea of set collecting, player collecting, or team collecting. It also breaks down where you could find cards at the time to build your collection. Still seems strange to me as you are at a card show so odds are you already knew all these tidbits.

The lower article for a naive me was interesting, and very informational to the collecting at the time. Living in the area we did the idea of keeping your cards in the best shape possible wasn't something we thought about. We were still going through them all the time, and just throwing them back into the box. The only cards that we were willing to spend the money on pages for were the cards we loved the most. Not even those cards were treated with the respect  you would think our favorite cards would be treated with. Who didn't mistreat our favorite cards as a kid though? 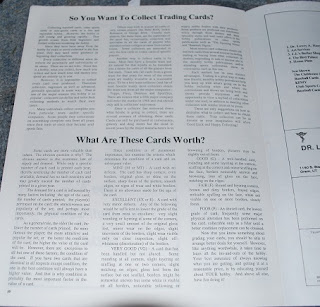 It was a blast finding this thing. Brought back some great memories of my very first card show as a kid. If history is any indicator it'll end up misplaced again, and found in another year while I'm cleaning my hobby room, or the garage again. Then just like this time I'll give it a look over, and read it again. Its amazing how something so simple still entertains me every time I find it.
Posted by The Prowling Cat at 1:30 PM