During my time of being sick two of my last three artelopes that were roaming the badlands made their way home. One of these was a drawing that I was fairly proud of, and even more proud of the results.

My scanner doesn't do this envelope justice. While my stars could still use a little work sometimes. This was one of those drawing that even being simple was one I'm pretty proud of. Even though it all looks red from the scan it is orange. I actually used an orange pen with sparkles in it that just left this envelope sparkling all the way around. The Dynamo for those that don't know are members of the MLS, and so I just went with a large version of the teams logo. Something about the logo just called out to be the artwork for this request. In the end I listened, and it paid off. 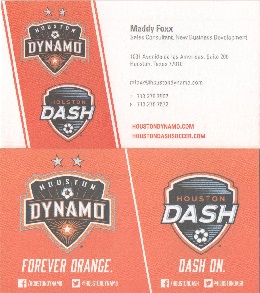 Usually I put down wanting schedules with my requests to go with the business card. Judging from the return I failed to do this, and personally it doesn't matter. The reason for this request was a business card, and business cards is what I got.

These are very well done cards by the Dynamo's, and something they should be proud of. From the cards I've been adding lately it seems like alot of teams are stepping up their game when it comes to their business cards. Houston can be added to that list of teams doing this. With this card into the collection only 11 teams remain from the MLS with more requests about to head out soon as the Dynamo's return put a little pep in my step.

My other return came from baseball, and the Midwest League. At the time this was sent out I'd done a fairly decent amount of requests with not many making it back. This left me mentally drained, and unmotivated for drawing. I knew that I needed to get a request sent out to the River Bandits as they are one of the many teams who went through an affiliate change. Looking for ideas this is what I came up with, and it works for the teams name. 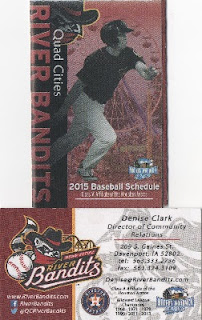 Despite being a few years since mailing the team, and thus not knowing what to expect. The River Bandits showed that they haven't lost a step since the last time I sent out a request their direction. Included in the return was three of the schedules above, and a business card with the new affiliate logo on it.

Thanks to this return the Midwest League is now back to fully represented in current status for the business card collection. This puts the count to six leagues current, and 30 teams needing to either be updated, or having an original card added to the collection for baseball. With these two returns I've got the motivation back, and with me starting to be closer to beating this nasty cold. A brand new batch of requests will be worked on over the weekend for teams in baseball, soccer, and lacrosse. Hopefully these can nail down some much needed teams in the collection.
Posted by The Prowling Cat at 7:40 AM