Duff Really Has The Stuff

When coming up with the title for this post I wasn't sure if it would be lost on people or not. Odds are until I start to explain it a little more even those that do know are possibly lost. It is all a reference to the man who had to be one of my favorite wrestlers in WCW. 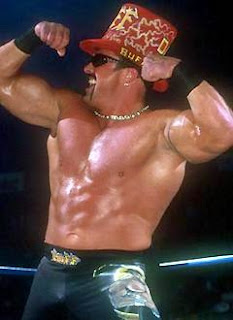 During those days I enjoyed the gimmick of the man who wore the tall hat, and cool looking sunglasses. He just looked like he was having a blast, and doing what he loved. Throw in the catchy name of Buff 'The Stuff' Bagwell, and he was just too cool.

While Buff had the stuff there are odds that he didn't have any of this stuff. 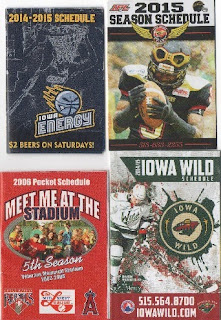 The one who did was the man who is always Bleedin' Brown and Gold, and runs by the new name of Duff 'The Stuff'. Sorry Bag's but there is a new sheriff in town, and he always delivers the stuff us bloggers are looking for. 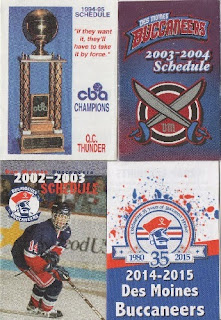 Duff wasn't done with those four schedules. No, he dropped even more stuff on this cat that kept him excited. 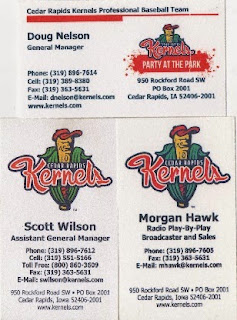 From there 'The Stuff' got serious by hitting me with business cards from another team in his area that has been eluding me. Duff doesn't just send any business cards though. No, he sends the cards of the assistant GM, the GM, and their play-by-play broadcaster. How is that for go big or go home?

Included in Duff's fantastic mailer was what has to be my favorite letter ever. The reason is Duff mentioned that he had hoped to have some other form of swag from the team to toss in. It then goes on to talk about how some staff went to spring training, but couldn't get anything. I guess compared to recent affiliates the new affiliate is cheap. Cheap, or not I really appreciate the four business cards from the Kernels.

Once again thanks for the schedules, and business cards Duff. Got some stuff I've had around here for a bit to send your way. Just need to get my act together, and send it out. Until then just know I appreciate the mailer.
Posted by The Prowling Cat at 7:30 PM