I Can Dream Can't I?

If I was to make a dream list I know one of the things that would be on that list would be living in the Phoenix area during spring training. I mean how awesome would it be to go to spring training games all the time? Get to go, and see all the MLB teams play in a laid back atmosphere. The only downside I could see is would I have enough vacation time to take the days off to see all the games I'd want to?

I see you wondering what is the entire point of all this anyways? Simply put it has to do with my latest PWE from Larry of the great blog My Topps 2008 Set Blog. Larry much like most everyone out there knows that the cat lists schedules as one of his hobbies. Not only does he collect schedules, but his two favorite teams are the Mariners, and Rockies. 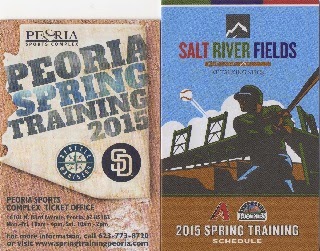 This years Rockies schedule was a welcomed change in my opinion. The last couple years these schedules were very close in design. The only difference was the picture was taken from different areas of the field. Seattle has been fairly similar the last few years, but just enough of a change that you don't feel like it's the same schedule. 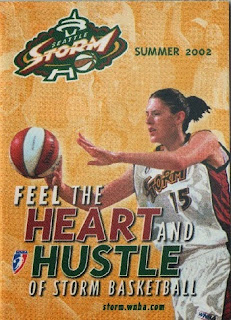 Larry tossed in a little bonus from the Seattle area to go with the memories of spring. To a Seattle fan this schedule is salt in the wound. Being the only professional basketball in Seattle is a sore subject to the basketball fans in Seattle. Lucky for me I'm both not a huge NBA fan, and if I was Seattle wouldn't be that team.

As for Larry living one of my dreams. I'm not sure about how far on the list living in Arizona would rate. I'm kind of fond of states close to the ocean now. Being able to drive less than two hours, and be at the ocean is a pretty cool thing. Being close to spring training still ranks pretty high though.
Posted by The Prowling Cat at 7:27 PM