Since doing the post about the fantastic cards sent my direction by Marc. Three artelope returns have comes in and, are about to be shown in all their glory.

For the first time ever I sent out a request with the artwork done in pencil, and not colored. The RockCats are the new Double A affiliate of the Rockies starting this year. Due to the name I gave the daughter the opportunity to draw one of the things she likes to do best, music notes. After drawing the notes she just wasn't feeling like coloring them, and told me to do it if it was going to be colored. Personally I feel it is up to the artist to color their work so it was left just the way she did it before being sent out. 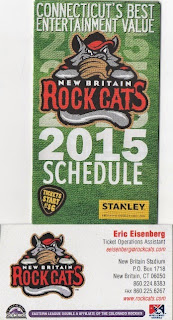 From the scan above you can see that the RockCats treated me well.Included in the return was four of the schedules, and one business card to update the collection. Seeing the purple bar across the bottom of the card was pretty cool to see when I first opened the envelope.

Another thing the daughter likes to draw, and probably her favorite is flames. I mentioned doing this drawing as I thought it would just make for a cool look on an envelope. She had never done fire with anything, but her Sharpie's so it did create a small challenge for her. I think she nailed it despite her worries that it would be an epic fail. 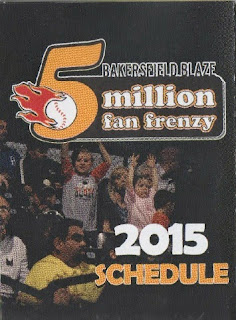 The bad news is the Blaze were the ones who epically failed in their return. The one schedule above is all that was in the return. I wouldn't have minded so much if the business card I really need for the collection was included, but no it was just one single solitary schedule.

The Revolution have always been one of my favorite teams to write. They have always been good to me in their returns, and have a logo that I love. In the past I've done some things with the eagle logo, but thought I'd keep it a little simplier, and do the drawing above. 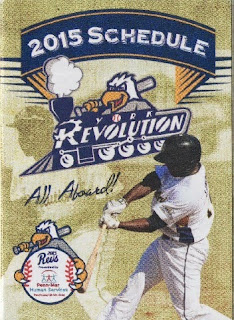 Included in the return was three of the schedules shown above. There was no business card request on this one as the team has sent me a few the past couple years.

Overall I did decent with the three returns. Two of the three sent some great returns, including one of the two with a business card. The one bad return was terrible, and honestly not too surprising. California teams seem to be real stingy with their returns. To get the business cards I currently have from the teams I had to either stop by in person, or pull out my secret trick. Might have to try the trick again later in the summer. Until then I'll just enjoy the schedules these three sent.
Posted by The Prowling Cat at 4:49 PM