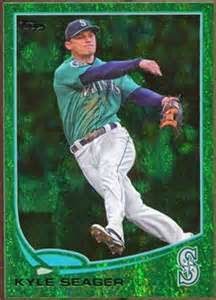 As most people have heard already. Seattle Mariners third baseman Kyle Seager has signed a seven year deal with the club. Included in the deal is a club option for an eighth season.

Add me to the list of people that are thrilled to see Seager get this deal. Seattle has a roster full of blaring holes with Cano, and Seager being the most solid everyday players. I've commented a few times in the past on this very blog about hoping the team would keep Seager around long term. This deal makes that happen for the next seven years atleast. With Seager now signed hopefully the team can now move on to filling more of the teams huge holes.

First base, and the corner outfielders being the biggest holes. Finally giving up on Justin Smoak the team site list Logan Morrison, and Willie Bloomquist as the two players at first base. Neither player instills confidence for fans on getting much production from that position. Throw in that Morrison missed a large amount of games in 2014, and you are stuck with Bloomquist. A player who is nothing more than a utility player as the teams first baseman. Not exactly the best situation for the team in 2015. Hopefully the team will find someone out there, or a prospect will step up. If not it will be a long season of mediocrity at the position.

With how bad the first base position looks the outfield corners is even worse. In left field you have Ackley who is hit or miss constantly. When he is on top of his game the man is incredible. Problem is those times are few, and far between.The bright side is Seattle is rumored to be in on the Justin Upton possible move. Adding Upton would be an incredibly large upgrade to the position.

In right is Logan Morrison, and Michael Saunders. The same Morrison that the team is relying on to play first base. What that leaves is a very disgruntled Saunders for the majority of playing time. Not long ago the team called out Saunders for what they believe is a poor work ethic. All this could be leading to Saunders being traded if that is even possible. Personally I feel his value is probably as low as ever, and will be just a thrown in piece of another trade. That is if any other team out there is even interested in him. To say right field is a mess would be an understatement.

The best news of all now though is Seager will be a Mariner for seven more years.
Posted by The Prowling Cat at 2:42 PM