I guess the truth is what an ending!

Let's start with the winner of the race. 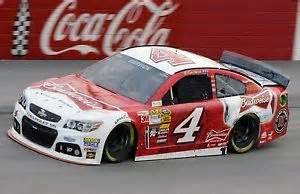 Coming on in the second half of the race. Harvick ran a good race that for once wasn't dominated by any one car. On a late restart with only three laps remaining when the race restarted. Kevin got off to a great start, and ran away with the win. 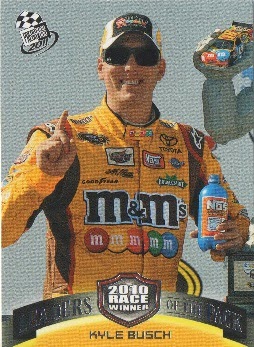 First off I am going to admit to using a recycled card for this post. After the way this race finished I'd rather post than scan a new card. So forgive me for the scanning laziness.

Kyle had a great race starting from the front of the field. While not getting the win that we here at the cat house would have loved to see. Busch finished a very strong 5th place, and put more distance between himself and 8th place.

After finishing a weak 17th, and seeing his chances to advance into the next round getting even farther out of sight. Brad Keselowski went nuts, and swiped Denny Hamlin's car while on the cool down lap. From there, Brad set his sight's on Matt Kenseth who was driving down pit road. Bumping into Matt his car then accidentally rear-ended Tony Stewart. Tony who has been known to not just take hits like this one, popped the car into reverse on Brad.

At this point the fun was just beginning. Denny taking offense with the treatment went after Brad in the garage area. Dragged off by his pit crew, and told to go into the hauler Denny was finished. Brad's night only got worse from there though as he tried to exit stage right. Slipping between a couple haulers, and walking along thinking he was safe. Matt Kenseth came from nowhere, and started fighting.After being separated each driver was sent their separate ways.

For Brad that direction has been rumored to be the NASCAR hauler. Word is that unseen by the camera's that were taping the race. Brad did a burnout in the garage area, and put lots of people at risk of serious injury. Word is that there might be some serious penalties coming from NASCAR for Keselowski. What those will be is to announced on Tuesday the rumor is.

Should be an interesting week for NASCAR fans as there is lots to talk about until next weeks race. Adding to all this drama is Jimmie Johnson, Dale Earnhardt Jr., and Brad all need the win at Talladega to make it into the next round. Losing all three of those drivers in this round would leave the chase wide open for the taking.
Posted by The Prowling Cat at 10:19 PM