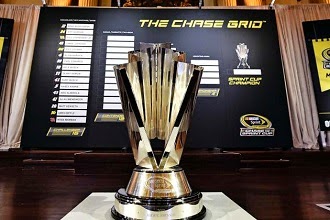 Today was Kansas, and what has to be one of the wildest chase races ever. While watching this race the wife commented that today was NASCAR's version of yesterday's college football. When the smoke had cleared it put three of the chase favorites on the ropes.

Starting in the back of the field due to a spin in qualifying was Jimmie Johnson. Then on lap 84 Johnson took a major hit when Greg Biffle's car bumped Johnson, and forced a spin. Included in the wreck were Justin Allgaier, and Josh Wise. Taking another 70 something laps to fix his car, Johnson came back out but finished the race in 40th place, and 87 laps down. The finish means Johnson's chances for getting to the next round are in serious jeopardy.  His only shots now are to either win either one of two very tough races or hope the other contenders have a day like the one he had today.

If Johnson going down wasn't enough of a hit to the chase favorites. Dale Earnhardt Jr. who was picked by most to be a final four contender went down. Later in the race Junior was leading when disaster hit in a blown tire. The quick right into the wall did major damage to the car, and may have ruined Junior's hopes as well. Finishing just two spots ahead of Jimmie in 38th, Junior now needs the exact same scenario as Johnson to advance.

If two guys going down wasn't enough. The one man picked to win the entire chase suffered the exact same fate as Junior. While passing Johnson a blown right tire slammed Brad Keselowski, and his two car into the wall. Finishing 36th, and much like Jimmie, and Junior needing either a win in the next two races or disaster by four other drivers in those tow races.

The disaster scenario is a possibility with the third race being at Talladega. There is always the looming wreck called 'The Big One' out there. Problem with this for the three who saw their chase take a hit is you can be part of that just as easily as any other driver. 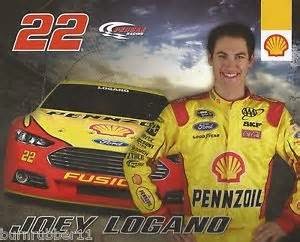 Coming out of all this madness, and guaranteeing himself a spot in the next round was Joey Logano.Showing he was a force to be dealt with. Running up towards the front most of the race it was obvious that Joey would play a huge part in who won the race. What this does is add more fuel to the fire of picking Joey as one of the favorites to win it all. 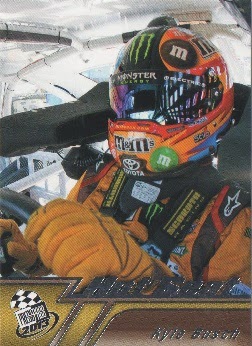 In what is quite possibly the worst track in NASCAR for our driver Kyle Busch. Kansas was much kinder to Kyle as he came across in third place, and a major victory. Giving what has to be the quote of the year in NASCAR after the finish. During his post race interviews Kyle said "I won today. I just didn't get champagne, and a trophy."

Going into this round, many have Kyle picked as one of the four that are going to be eliminated. While I would have liked to say no way. We are realistic, and realized it was a very strong possibility due to Kansas, and Talladega being in this round. Already talking about his past bad runs in Kansas I've already talked about Talladega, and the possibilities of it too. So having a great run in Kansas now has Rowdy Nation realizing that making it to the next round is a possibility. If he does look for Kyle to be a threat to win it all as the three races in the third round are tracks Kyle runs well at.
Posted by The Prowling Cat at 4:56 PM