Around three, and a half weeks ago I had a good day with three great finds.

Starting the day off was a swap meet over at the fairgrounds.This was the first ever meet, and something I was very interested in checking out. How to break the news to the wife was the big question. The problem solved itself as she mentioned going into town for groceries that were on sale that she needed. Feeling this was my opportunity to mention that we could hit this show I went for it.

Realizing I enjoy these things, and remembering how well she did at the show in July. She was all for going, and seeing what she could find herself. When the smoke had cleared she did pretty good in getting a Christmas display for the house. I walked away with some marbles for the old canning jar I've been slowly filling with old blue marbles. Had the hobby room not been filled already the purchases would have been much bigger. One seller had a short stack of five ice cream batting helmets with the old logo's on them. Would have loved to get them, and put them in the room, but without knowing where they'd go I passed.

From there we made our way to the Goodwill in town where I hit Mariners gold.

'Sweet' Lou was inducted into the Seattle Mariners hall of fame this season. As with the other players who were inducted the team gave away a bobblehead that game. Even though we didn't make it to the game I now have the bobblehead to commemorate the induction. Lou now sits in with all the other Mariners bobbleheads I've either gotten at games or found at Goodwill.

From there we did the wife's running around before coming home. Not long afterwards she mentioned that her cellphone battery was dieing at a crazy pace. Still early in the day, and she had charged it three times. So it was either get a new battery, or a new phone.

Telling me she would prefer getting a new battery we headed up to Salem for that battery. What this meant to me is a chance to hit my favorite Goodwill.

Making the drive up we went to my stop first where I struck Mariners gold once more. 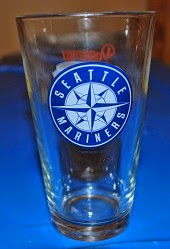 Not as fun of an item as the Piniella bobblehead, but still welcomed to the Mariners collection just as much. From there the finds weren't over as the next aisle was the nic-nac row, and this little gem. 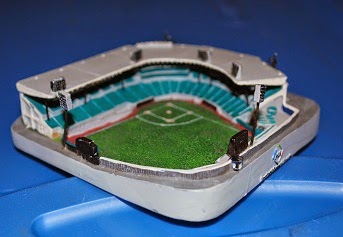 A giveaway from the Portland Beavers. Ironically the week before I got the same stadium, but with the soccer layout instead of baseball. This version is bigger, and not in as good of shape. I honestly debated about not buying it as the light towers are damaged. As you can see my love of stadiums won, and it came home.

Now it sits next to the Portland Timbers soccer layout, and looks pretty cool. Maybe one day I will find one in better shape, but until then this one will do just fine.

Overall it was a great day that I wanted to share back when it happened. Problem is that I was honestly in kind of a writing funk, and just didn't do it. Maybe soon I can finally catch up, and write about the finds from two, and a half weeks ago.
Posted by The Prowling Cat at 6:30 AM