There's Cards At The End Of This Rainbow

On Friday I got my half of a trade with Bryan who runs the blog Golden Rainbow Cards. Bryan sent a big hit to my 2013 Topps set, and some 2013 Opening Day. While showing off all the cards in a barrage of pictures might sound fun. I just can't go that route with all the cards Bryan sent. Throw in that if you've been keeping up with this blog. The name Golden Rainbow Cards just screams 'You have to do a dream mode post with me". When a blog tells me that who am I to not listen?

It was a Saturday morning just like any other Saturday. That is what I thought until I glanced a sight I was always told is impossible. Looking into the distance is began to sprinkle which in Oregon isn't a big deal as it rains quite often. What you don't see is the sight I noticed next. It appeared that four rainbows were merged with a shared endpoint. Thinking to myself this is unusual I couldn't help but be fascinated by the sight.

I began remembering my childhood as a teacher in school once told us you can never find the end of a rainbow. He explained to us how it's just reflected light, and all that other jazz. Still there was something about this sight that I couldn't resist. Intrigued I found myself driving in the direction of the merge point.  As I got closer it appeared that it was inside a wooded area. Pulling up it became obvious that the merge point couldn't be driven to. Still amazed that I could see the rainbow's merge point I thought could that teacher have been wrong? Leaving the car behind I began to walk towards the woods when I noticed something on the ground. Slowly, and careful at the same time I bent down to pick up. 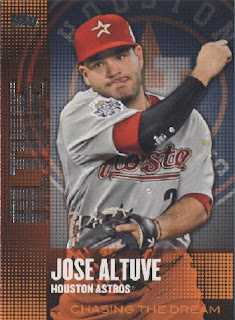 As I picked up the card one thing about it caught my attention. Not the team or player, but that despite the rain this card was still dry. Intrigued by the find I had to see more. Slowly I entered the woods wondering if there was gold close by. Sneaking in deeper I heard laughing that didn't sound like any laugh that I'd heard before. As the laughing got louder, and louder I stopped, and looked through some bushes. What I saw on the other side was something I had never been prepared for.

Dancing around a huge pot were five little men dressed baseball uniforms. As I watched in amazement the laughing stopped. One of the men looked directly at me, and then pointed in my direction. Thinking this was my opportunity I sprang into action. As I tried making my way through the bush all five men grabbed the pot, and started to run. Cardboard started to fly from the pot as the scramble continued. Running through a bush I attempted to follow, but the men were gone. I started to think to myself about where they could have gone so fast. Heading back to the original location I noticed baseball cards scattered across the ground. 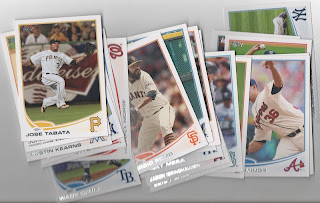 As I picked up the cards the thought about how odd this entire thing was kept running through my mind. Question after question was going unanswered. What just happened to me, and was all this real? Could I have seen the baseball leprechauns that many believe are nothing more than a myth?  Should I tell anyone about this or keep it a secret? Stunned I headed back to the car more confused than ever. In the end I think I'll keep this as my little secret. Who would believe me anyway.

Thanks for putting me closer to completing the 2013 set Bryan. Once again go check out Bryan's blog that inspired this little story. Golden Rainbow Cards
Posted by The Prowling Cat at 6:00 AM