Just before leaving for the big vacation I sent out two artelopes in hopes of updating the business card collection. The first return came from the Reading Fightin Phils.

Looking to give themselves more of an identity than just being named the Reading Phils. The team made a big deal about this new name that would change everything, and what they came up with was the Fightin Phils. While the name change ended up being a huge disappointment the logo was better than the old Phils logo from past seasons. This artelope was drawn by me, as the daughter had no interest in taking it on. Keeping it simple I went with the "F" fist logo. Not glorious, but it worked in getting me some schedules, and a business card. 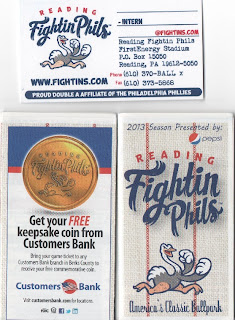 The second return came from another team that got a new name this off season. The Scranton/Wilkes-Barre RailRiders who were formerly known as the Yankees.

How long this name lasts is yet to be seen as Scranton/Wilkes-Barre has gone through a few name changes in the last fifteen years. The Yankees wasn't even that old itself so it will be interesting to see how long they stick with this new name. 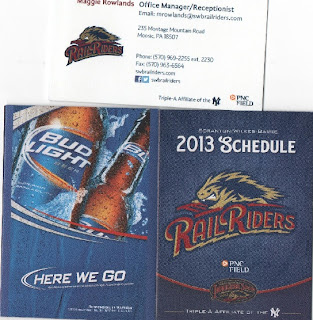