Today’s post will start with the plan for the day. Depending on if we were able to visit the Jelly Belly or not will determine the day’s plan. For the sake of this post we will say it somehow happened. This means we will wake up, and start the day out whenever we feel like it’s time to get going. The plan from there is to make the three to four hour drive down to Visalia. Hopefully this will all end in a ballgame as the Rawhide are home tonight. In 2007 we made this trip, but had stayed an hour north of Sacramento.
That year we slowly made the trip south by first stopping off at Raley Field for some RiverCats goodies. This was a cool stop that falls under one of those I wish I knew back then what I know now. While there we just walked around the team store, and bought a t-shirt, and logo baseball. I had talked to the store employee, and walked out on the concourse for a quick glance. The then me did the look, and left without a second thought. The current me wishes I would have walked out a little, and taken a few pictures of the park. If given the chance to do it all over again I’d head out with the camera, and get some pictures of the park. 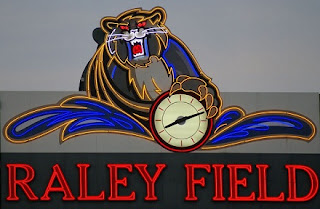 The second stop was in Fresno for the Grizzlies. Personally that stop was the one I wanted to make more than any of the other ballparks. This stop will be one I’m going to say will not even be considered in any future trips. While I enjoyed the stop, and getting some goodies for the Grizzlies. The ballpark was awesome, and is another I wish I’d gotten pictures of. It looked like a great park to watch a game at, but I’d never do it. One thing that has always gotten to me, and is something I’ve never seen before is the reason. As we showed up to the ballpark we had to walk over to the ticket purchase booth. From there you have to ask permission to be let into the team store. Before allowing you in they ask what you are wanting from the store. Nothing like having to go in with a plan on what you plan on purchasing from the start. This entire thing set off red lights in my head. If a person has to go through all this to buy team merchandise, that is one bad neighborhood. To be fair, things might be different now or something I didn’t know about was going on, and led to all this. 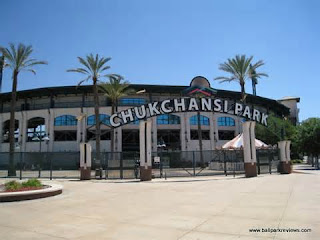 Finishing up the day will be the part I’m looking forward to. It’s strange to be saying that after our 2007 experience in Visalia. We did a game that year, and personally I would rate the ballpark a full on dump. It’s amazing how things have changed in those six years. The Rawhide have gone through both a name change from the Oaks to the Rawhide, and a total overhaul of the stadium. This overhaul has led to most reports saying it’s a must see stadium. On the first trip things were so bad that my daughter wanted to have her picture taken with the squirrel mascot, and got a huge NO! The mascot was so nasty that we didn’t want her anywhere near the thing. I kid you not when I say that it had holes in the costume that had duct tape, yes duct tape holding them together. This is the moment that I finally understood that they are right when they say duct tape can fix anything. The wife even went off with a scream of “No! IT’S PROBABLY RABID!” 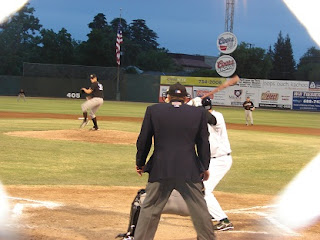 When we contacted the front office about tickets I learned the staff member I talked to had just moved down from Salem. We talked a bit as she was excited to get visitors from so close to home coming to a game. Her last comment before I hung up was stop in, and say hello. After such a bad time I had to stop in, and let her know how we felt about the whole experience. Luckily she was out of the office as when I entered you couldn’t walk more than five feet inside the front door. There was papers everywhere stacked, and small trails leading to each desk. It looked like the front office for a pack of hoarders.
With such a bad experience its crazy that I am looking forward to going, and hoping that they redeem themselves this time. Either that or I will learn that I am into torturing myself. No matter how it ends it should lead to a great post about the experience once we return.
Posted by The Prowling Cat at 7:00 AM