It Was A Zoo Last Knight

Last night we got to see what will hopefully be our first of atleast seven games for the Corvallis Knights. I know it should be close to seven games as in March we purchased a twenty ticket punch card, and plan on using it up. Originally we were looking into doing a different game, but due to finances and the wife pointing out we should start using our punches it was off to a Knights game. Choosing this game was possibly the best decision ever as we were treated to not just a between innings show, but a show on the field as well.

First was the big change to the stadium. A change that sadly affected all my pictures, and will change all future pictures if I take any. The Knights play at Goss Stadium which is the home-field for the Oregon State Beavers. Seats down the lines are very close to the action, and are protected by a very short wall. That was changed before the Beavers season started as the team finally added netting all the way down both lines. While I am sad to see the netting at the same time I was excited it was done. Balls came down the line very fast, and honestly was going to hurt someone very seriously. That is if someone wasn't already seriously hurt before the netting. I can't count the number of people who sat in that front row, and had their head turned away from the action constantly. We paid attention all the time, and brought baseball gloves. Even with those gloves it still made me nervous at times. We started sitting up higher for some games due to all the scariness. So in the end I believe it was a great call to add the netting, but I will still hate it deep down inside.

The game itself was simply incredible. The special appearance was the Zooperstars who we went almost upset about being forced to see. Then as they started doing their little shows we became instant fans, and were happy to see at the end of each inning. The first two were Harry Canary, and Tim Tebull who did a great dance routine. 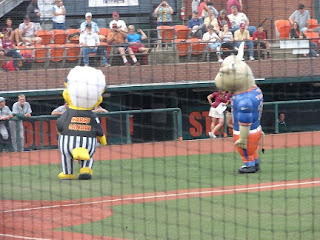 As for the game, it will be a tough act to follow for future games. The first three innings were a defensive fans delight as Klamath Falls put one runner on base due to a walk, and other than him the bases stayed lonely. 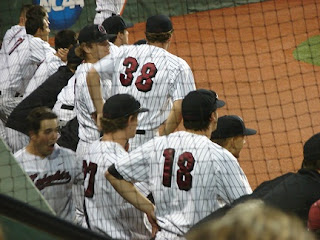 Things changed in the fourth as Klamath Falls scored one run. Three more runs in the fifth followed then by a final run in the sixth to make it Klamath Falls 5 Corvallis 0. This is when things started to get interesting as Corvallis loaded the bases in the seventh with no outs. Scoring the first run as Klamath Falls chose an out for a run. The next hitter slammed a rocket caught by the third baseman who was getting ready to throw out the runner from first who was halfway to second to apparently end the inning. As the crowd started to let out a huge moan the home plate umpire was running down the line signaling a balk. Giving the Knights a run, and new life the crowd went wild. Before the inning would end the Knights scored once more to make it 5-3. With momentum in their favor Corvallis added another run in the eighth to make it a ballgame at 5-4. Corvallis started the ninth with a hit batter, a fly out, and a walk to put runners on first, and second. At this point the wife started going through the scenarios for both a win, and a loss. Looking at her I said a double wins it. After spitting out the last word the batter hit a rocket to the base of the left field wall, and the race was on. What looked like it was about to be a very close play at the plate wasn't as the throw from the cutoff man sailed way over both the catcher, and pitcher who was backing up the play. 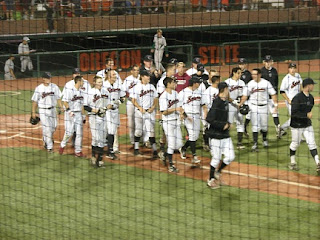 I had some great shots of the celebration, but the netting blurred the pictures. The one drawback of digital camera's sometimes is they seem to focus on the netting when it's the most inconvenient. Overall it was an awesome game, and will be a tough game to beat as we hope to catch many more before the season ends for all the local teams.
Posted by The Prowling Cat at 10:02 AM