Its Friday, and the trip goes on the road. The plan is to get up, do any little things we want to do before leaving for Las Vegas. From reading the Disney forum we visit, it means leaving Anaheim by noon at the latest. Any later they say you will hit some major traffic going from Los Angeles to Las Vegas for the weekend. We want to avoid the traffic mess as today’s plan includes us trying to hit a 51’s game tonight. This game will either be the last game for the trip or one of two I will see in Las Vegas. The wife wants to see tonight’s game then spend our Saturday, and Sunday nights walking the strip. 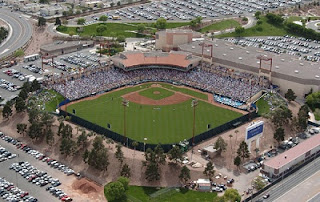 Cashman Field is another of those stadiums I have no pictures from. Back in 2003 when we were last in Las Vegas I didn't even bring a camera. At the time our knowledge of the team was limited, and has since grown leaps, and bounds. The strange part about the game we did go see was another of those things that drove me crazy. The choice was to see the second closest triple A team for us, that being the Tacoma Rainiers. The only thing that would have been more nuts is if the Portland Beavers would have been in town.

The saddest thing about the entire experience is I remember very little about the stadium, or the game. Most of the time was spent visiting with a relative of the wife who had a hard time clearing up the schedule for the game. I do remember that despite not knowing how the game went that we did have a great time talking, and watching baseball.
Posted by The Prowling Cat at 2:00 PM