This Is Going To Hurt- Chipper Edition

As has become a series of posts on this blog. Despite not being very regular as I had originally planned it to be. The 'This Is Going To Hurt' posts has become one of my favorites each time I write them. Being on vacation, and it being Father's Day. I thought it would be a great day to continue the series with a twist. The twist is that I am taking the series in a whole new direction. Instead of the usual three cards, this will be just two cards. Both cards will be of the great Braves, Chipper Jones.

There are two reasons for this special twist. The first is at the last card show in Beaverton I saw two Chipper Jones cards featuring a play at the plate. Both cards were just screaming take me home, and write about me! How could I not listen to these two cool cards? Throw in that they cost a mere ten cents apiece, and I was in.

The second reason for this twist is simple. No matter your team, how can you not be a Chipper Jones fan? While I could care less about the Braves. There is just something about Jones that says you have to respect my game. One of a rare breed these days, the guy spent his entire career with one team. Despite getting a call this year from the Yankees. Jones stayed loyal to not only the Braves, but his retirement plans.

In honor of a great player its time to show off some great cards to Chipper bringing the pain. 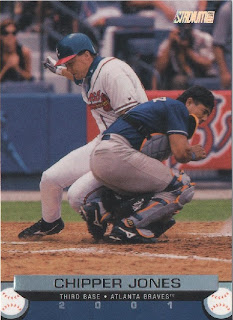 This would have to rate as one of the best cards ever for a play at the plate. Being he doesn't have his mask on you can tell that Chipper really got him good. From the look on Chipper's face he isn't coming out of this meeting without feeling the effects himself. Just looking at this card its obvious why I had to get this card for sharing. 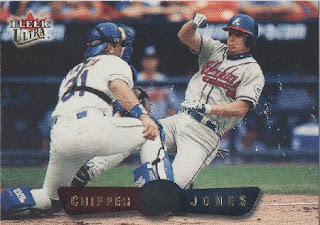 Another great looking card isn't it? While you can't see Piazza's face it's obvious Chipper is getting the worst end of this collision. From past cards I will say Piazza has that same look inside that mask. I will also say with the set up, and no ball in sight. Chipper was probably called out on this play.

Hopefully you are all having a great Father's Day, and enjoyed this special version of 'This Is Going To Hurt'.
Posted by The Prowling Cat at 7:00 AM