Hopped Up To A Game

Around our house this is the happy time of year. While I am a huge baseball fan, and love catching a game whenever possible. The wife enjoys baseball, but is looking forward to the college football season as well. This means lots of games, and Saturday was another opportunity. This season the Yakima Bears moved into their new home in Hillsboro, and got a name change to go with the move. If you missed it the team was named the Hops in honor of the beer industry around the area. Saturday night I was itching to go, and check out this new team and stadium. Seeing on the schedule that it was supposed to be D-Backs night, and have a special appearance by Baxter. The mascot fan in me said we had to go. First my haul from this trip. 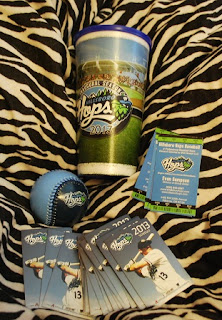 Arriving early as number one it was an hour, and a half to two hour drive. Number two I wanted to see what the sculptor they put outside the stadium looked like. We arrived forty minutes before the gates were scheduled to open. Heading straight up to purchase tickets we got the bad news that the only tickets available were general admission. With no choice, but to accept the choice we got in line for entrance. One thing I really liked was they opened the gates fifteen minutes early to ease things up in the outer area as the crowd was insane. Anytime we have ever been to a game they stick to the opening time no matter how crazy things get out front. This was a very welcomed change. Once inside we headed straight over to the grassy area to claim our spot. Taking pictures until around the seventh was useless as the sun made it impossible for us to even watch the game from our spot. So all these pictures are from later points in the game. 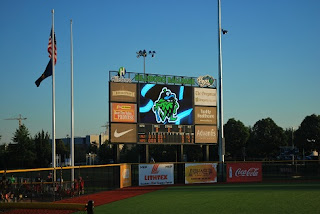 Not a bad looking scoreboard. By the time of this picture the score was already 6-0 Salem. In the end it would be 7-2 as Hillsboro scored two in the eighth. 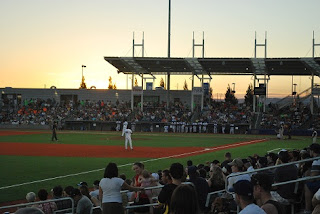 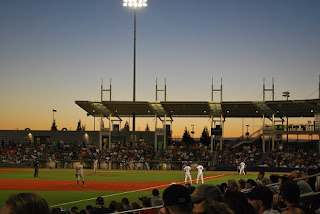 The part about the entire experience that annoyed me is Baxter never appeared. They never even mentioned the D-Backs once in what was advertised as D-Backs Night. Overall though it was a good experience that I would like to do again in the future. As you can see I didn't take any pictures of the sculpture out front. It was very cool, but had kids all over it the entire time we were there. At night it had a strip of color that kept changing which added to it's coolness factor. Maybe if we get up there in the future I'll be able to take some pictures then.
Posted by The Prowling Cat at 10:25 AM