With the year coming to an end, and a few of these already popping up. It's time to get the results for my 2014 bloggolutions.

This year I added difficulty to some of the carry over goals. Some of the new goals had a little more of a difficult feeling to them also. My goal was to make these things that would take focus for the entire year not just short term. In 2013 I was so new to blogging that some goals were easier than I thought they would be. Keeping those goals in mind I went harder this year, and as you will see still did quite well. I might have even done better this year with those much tougher goals.

Due to these goals I did a much better job of keeping track of things. This is why you see the part 1 in the post title. I'd like to go more in-depth, and share my notes in these two posts. So without further ado lets get into it shall we?

This was a much tougher than I thought it would be goal. Three months into the year I was ten posts up on the twenty per month I thought it would take. Then came April, and the wife's car wreck. From there my posts started taking a sharp decline, and next thing you know I was behind schedule. From there I once again started another come back, and made up some of the lost ground.

December was the final nail in the coffin for me coming up short. Yes, I could have cranked out some posts, and made it happen. I was a mere 21 posts away, but just couldn't get myself to do it. Something in me just wasn't motivated enough to put out the required posts, and thus I fell short of the 240 mark.

In the end my biggest problem is I go through writing spurts. One month ideas are flowing like crazy, and I'm writing almost daily. The next month the ideas either dry up, or I just don't feel like following through on ideas. What I learned more than anything is my breaking point seems to be somewhere between the 215, and 230 post point. While I will continue writing as normal in 2015 this gives you an idea of what you can expect for the year. As for how I did with this goal.
9/10 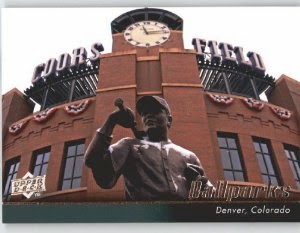 2- Finish 10 sets or subsets of baseball cards.
While I didn't accomplish the ten sets I believe that I did fairly well. Especially when you consider my prediction at the start of the year. That being most of the completed sets wouldn't be from my lists that were currently needing less than five cards. Amazingly not one of the completed sets came from that list. If you would have told me I'd complete the amount I did, and not one would be from the less than five I'd have thought no way. Well, it happened!

Starting off the first half of the year I had four sets crossed off the list. They were 2013 Opening Day set, 2010 Upper Deck Ballparks, 2013 Chasing the Dream subset, and 2013 Gypsy Queen Collisions subset. Not a bad start to the year as a couple of those went down easier than I expected.

From there things slowed a bit as the second half saw two huge sets bite the dust. 2013 Topps flagship series 1 and 2 were the victims. These two had huge wantlists, and went down in one giant swoop. After this the set completions stopped, but some others took hits.

Yes, I got six set, and subsets completed for the year. If you ask me this was a huge success as it wasn't just better than I honestly expected to do. Other sets I have been trudging along on for years are getting closer. Hopefully 2015 will be the year I can finally cross some of those off the list.
6/10 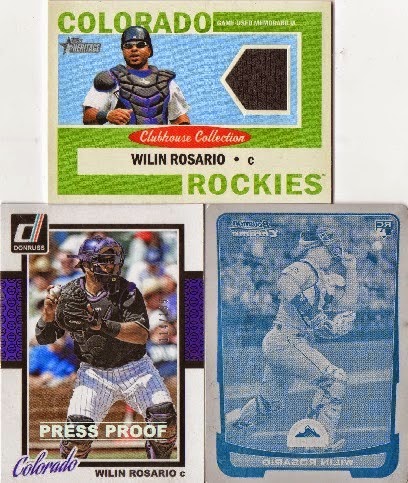 3- Add Rosario, and Trout nectar to the collection

First off for those that don't know about this goal. Nectar is the slightly more expensive items. Basically this consists of auto's, patches, bobblehead's, and anything else tougher to find than the basic flagship cards.

When I set this goal I thought it was going to be near impossible. I also was realistic, and knew most of these would be Wilin Rosario items. Mike Trout is such a huge superstar that anything from his I added were going to be a bonus. True to my prediction, Rosario dominated this goal.

Things started better than I ever expected in the first half. I was able to add the following four items into the collection. Mike Trout McFarlane figure, Rosario Future patch, Rosario Gypsy Queen patch, and a 2014 Rosario Museum auto, and patch. Talk about starting off with a bang.

Little did I know that those cards, and figure would be minor league compared to what was coming. Sputtering along, and adding a Rosario 2013 Golden Moments auto, Rosario Making His Mark patch, and a Trout 2014 Bowman prizm.That is when Chris from the awesome blog The Raz Card Blog dropped a mailer on me. This might be the greatest mailer I have, and ever will receive again. Inside were four cards that not only pushed me past my goal of ten. These cards left me stunned, and still as I write this have those same results. Trout 2014 Donruss Dominators prizm, Rosario 2012 Bowman cyan printing plate, Rosario 2014 Donruss Press Proof, and Rosario 2014 Heritage patch.

When the smoke had cleared eleven items were added. I was pleasantly surprised at the fact three of them were for Mike Trout. This was the amount for him I had hoped for at most, and so hitting it was a nice addition.

4- Complete 52 trades of baseball cards.
Possibly one of the more important goals I set for the year. One of the many reasons I do this whole blogging thing is to trade with other collectors. I knew going in that 52 was going to be very tough for me, and quite the stretch goal. Yes, I could probably do it easily if I just sent a PWE to people over, and over throughout the year. That wasn't the way I wanted to attempt reaching this goal. I wanted it to be a mixture of both, and let the chips fall where they may for the year.

One thing I was is pretty consistent when it came to this. Before July 1st I had sent out 23 batches of cards. after that date I mailed out another 20 for a grand total of 43 trades sent out. There were a couple more that I had planned on doing, but they have gotten held up. I will try to get these sent out sometime this month to their new homes. While I didn't accomplish the goal I don't feel that I did all that bad in where it ended up. 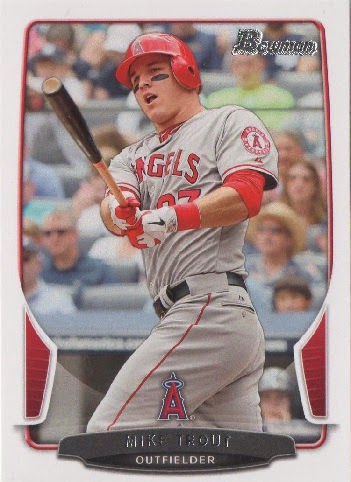 5- Add 40 cards into the Rosario, and Trout collections
Going into the year this was another goal that I had a feeling on how it would end. Not if I would add the amount of cards planned, but that a majority of the cards added would be for Mike Trout. When the smoke had cleared I was right on with most the cards being for Trout. Most sets are putting out so many cards for him, and only one or two for Wilin Rosario. I knew it was a no-brainer that most the cards I got would be of the Mike Trout variety. I did have my doubts on the number though as I wasn't sure if I could find 40 cards for the two. The cards from the nectar goal wouldn't be counted or it might have been much easier.

Amazingly I hit the nail right on the head. Added to the Rosario, and Trout collections were 40 new cards. Mike Trout topped the additions with 31 new cards for the year. It was an almost even split of amount added each half of the year. The first half saw 16 come in, and the second half 15. As for Rosario I added a respectable 9 cards with a split of 6, and 3.
10/10

There you have it. The rundown of the first five goals I had set for 2014. The 43 out of 50 is right around what I had hoped for when setting these goals up. If I could have done just a sliver better on the sending out cards front it would have been a dream.
Posted by The Prowling Cat at 10:24 AM