If all goes as planned there will be a ton of artelopes leaving the cat house in 2015. So far the few returns that have come back were everything I could hope for. That is the good news, the bad news is counting this return I have only gotten back three of the ten sent out. Hopefully more of those will start making their way home. Until then we have the third one of the year to return for your viewing pleasure.

When I did this one my brain was starting to get a little weak for ideas. Wanting to get something out to the Drive I decided to go with a simple huge DRIVE written on the envelope. Trying to keep things a little more interesting, and related to the sport the team represents. I went with a basketball as the dot on the "i". In the end I think it turned out great for what the idea was, and the results were just as great. 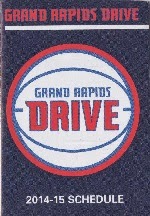 Contained within was two of these 2014-2015 schedules. That wasn't even the best thing inside. 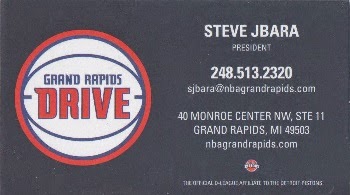 My second business card for the year, and coincidentally second one for the NBA Developmental League. Not a bad way to start the year off by getting two business cards in the first three returns. As I've said before, if this keeps up 2015 will be an awesome year for the business card collection.

Currently I am still missing ten teams from the NBA Developmental League. Three of the missing artelopes are for teams in the league. Another two are ready for mailing, and the remaining will be prepared soon. If luck is on my side the league will be crossed of the wants by the end of February.
Posted by The Prowling Cat at 11:04 AM