Its Not You, Its Me!

The big question is why would the cat bring this all up? That reason is I am in the process of tuning up the player collections.The process entails eliminating those players that I've just lost interest in. Today those few players will be getting the bad news that they are no longer wanted for the cat's collection. 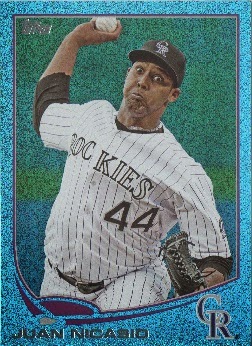 Juan Nicasio
When I first got back into collecting baseball cards there was something I wanted to do. That was to collect a player from my two favorite teams. Being I always wanted to pitch when I was younger. One of those players ended up being Juan Nicasio.

Now after holding out hope for a few years that Nicasio would turn it around, and finally reach his potential. Then came a very rough 2014, and the loss of all hope from me. While I still for some strange reason picked up his cards when I came across them. My desire to continue started to waiver, and finally died during this off season. Nothing against the Dodgers, but his trade to the team as a possible middle-reliever or fifth starter was the final straw. It's tough to convince myself to pick up his cards while I'd lost interest when he was on the Rockies, and even harder now that he's in LA. So rather than keep up with the insanity I'm ending this relationship now. 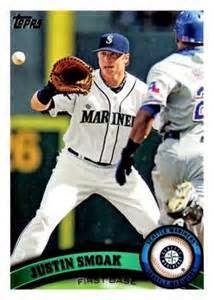 Justin Smoak
Another of those players that I've been losing interest in for awhile. Smoak might get a new chance at life since being let go by Seattle, and now landing in Toronto. The problem is that before all this was announced my interest in Justin was long gone. The few cards I was able to find of him were already removed from the binder, and a new player has stepped in. 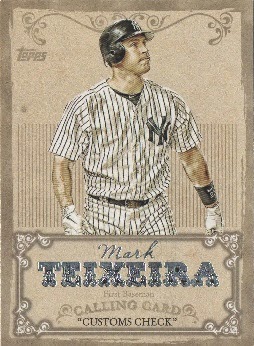 Mark Teixeira
Out of the players that I'm moving on from this is the one that might hurt the most. Tex's cards were making their way into a binder before I had even admitted that I was back into baseball cards. I had joined the online trading group, and was trying to get rid of cards, and build some old sets at the same time. During that time the Tex collection started as something else to try, and help give people something else to send my direction. The collection continued to grow despite him joining my much disliked team the Yankees. Then came all the injuries that Tex has suffered lately. It was during this time that I was slowly wondering why I kept adding cards.

Now with the season over, and me being able to sit back. I started to assess whether or not I wanted to continue the craziness. The answer came in a big resounding no! All that needs to be done now is to figure out what I want to do with the cards, and other pieces that make up the collection. Some I know are cards I am missing from sets that I'm currently building. Other will probably end up in the hands of fellow collectors who collect players from the teams he's been on.

While it might be some work to disassemble these collections. In the end I think it will be refreshing to spend more time collecting players that still interest me.
Posted by The Prowling Cat at 7:53 PM