Back in September of 2014 I had sent out an artelope to the Philadelphia Eagles.

The request was sent with the hopes of adding their business card into the NFL part of the collection. Included was the usual request for a few pocket schedules that I could use for trading.

Time went on, and just over two months later in November I gave up on the Eagles. No other collectors were getting returns from the team so at the time it felt like a safe bet. That was until last Thursday when a huge flat manilla envelope addressed from the Eagles showed up in the mailbox. 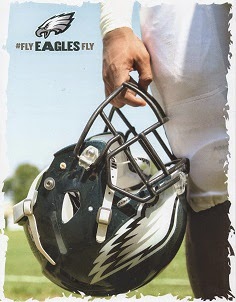 While there was no business card or schedules inside. This picture on photo stock paper, and the size of a full sheet of paper was inside. What I'm going to do with this picture is a mystery being I'm not an Eagles fan. 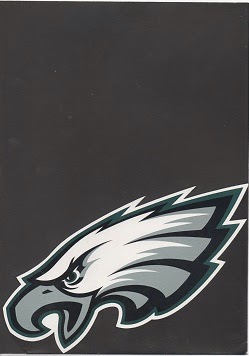 Holding the photo was this cool looking folder. Still not being an Eagles fan, this thing is cool enough that I'm going to try, and find some use for it. Maybe throwing some stickers or something from other football teams on it. Who knows what its fate is, but it will find some use.

Not exactly what I had hoped for when writing the team, but I will take it. Overall the Eagles did a great job in sending these two sweet looking items. If I had to get a return that doesn't have the business card I'd like to get. What was sent in this envelope would be that.
Posted by The Prowling Cat at 3:44 PM