Keeping my streak this week of doing only trade posts. Early this week fellow schedule collector Bill was looking to fill some holes in his Florida State League schedules. As luck would have it I had five schedules he was missing. In exchange Bill sent me four 2013 minor league schedules. 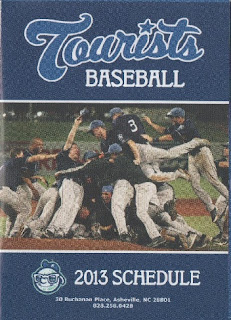 As a Rockies fan I collect all the Rockies schedules, and all their affiliates. The Asheville Tourists are a single A affiliate of the Rockies from the South Atlantic League. So I have one affiliate down, and all the others left to go. Lucky for me a co-worker is going to Tulsa later this month, and will hopefully get me a good batch of Driller schedules.

The remaining three schedules from the batch are teams I have been collecting for various reasons.

The York Revolution are an independent team in the Atlantic League. The Montgomery Biscuits are the double A affiliate of the Tampa Bay Rays, and play in the Southern League. Closing out the batch is the Winston-Salem Dash a single A affiliate for the Chicago White Sox. The Dash play in the Carolina League. On a side note their mascot which is pictured on the schedule is quite a sight.