Now This Is A Garage Sale

On Friday night the wife texted me during a break at work that in Portland they were having what they refer to as 'The World's Largest Garage Sale'. I say it's neither the world's largest or a garage sale. Personally I would say it was a huge flea market, but to each their own. I started by asking the daughter if she was interested in the trip which was hit with a resounding 'NO!".

Waking up on Saturday morning I was full of excitement with seeing what this event had to offer. Waking up early for the drive, I arrived ten minutes early ready for fun. Walking in to purchase my ticket the lobby was jam packed with people who were just as excited if not more than myself. As eight struck the doors opened with the crowd going in without a problem. Looking at the crowd size this to me was very impressive as most times things get crazy when doors open.

Entering the doors I was forced to decide my direction quickly as the crowd was still filing in. Moving to the far right I got right to business. Only going a few spots before landing this little treasure.

This is the third car for my collection of Cartoon Network racecars. Along with being the third car, the seller informed me the autograph is from the driver of the actual car. I was able to get a pair of Richie Rich comics for the wife to go with the car, and was only out five dollars. Moving on it took quite awhile before I made my next purchases. 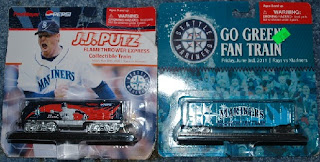 These are very popular here in the Northwest. I'm not sure how long the Mariners have been doing these trains, but for only two dollars each I couldn't pass them up. While the box for Putz isn't in the best of shape they are still pretty cool additions into the collection. After the train came my wife's favorite purchase. A seller had a stack of Disney comic books, which he only wanted twenty-five cents apiece for. Making a call to her to verify what she liked to read I ended with a stack of 16 comics. 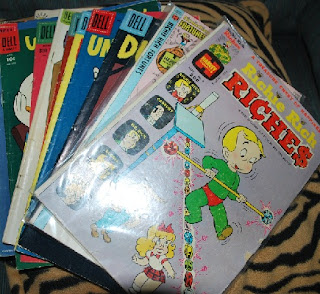 Ending the day I snagged another treasure for a collection that I've been building. 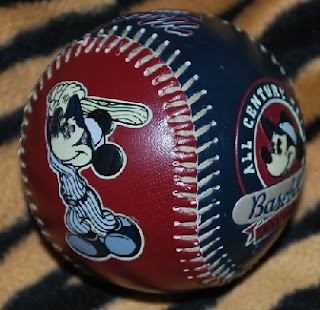 I keep telling myself that I'm going to slow down on buying these baseballs, but then I buy another. Being a Disney baseball I couldn't stop from adding it into the collection especially for only two dollars.While there were some other close purchases that I passed on. I'm happy with what I did bring home. While there they kept talking about another show in late July. It sounds like a good time, but it's close to both the wife, and my birthday's so odds don't look good.

Posted by The Prowling Cat at 1:58 PM