It's a PWE Grandslam!!

Close to a week and a half ago we made a trip up to Seattle. During that trip I managed to snag a good amount of Mariners pocket schedules for both my collection, and for trading. The best part of those picked up for trading was the foreign language schedules that I was lucky enough to be the first to post as available for trading. Sending out my share it was time to wait for the returns. On Monday I got hit with all four remaining trades, which resulted in a PWE grand-slam.

The first single came from Dan. This was the final two schedules Dan promised to me when they came out. 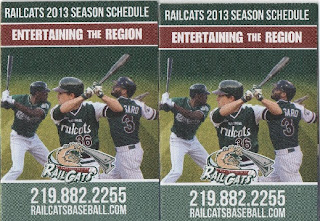 The RailCats are my favorite independent league team. Running in the American Association I've been a fan of the team since day one. For some reason I just enjoy the logo, which has led me to purchase a few items from their team store. Each time I dealt with the organization they were first class, which has helped keep me as a fan. It's been a few years since our last dealing as Dan is close, and has been hooking me up with goodies from the team.

The second hit came from Mark who dropped another sweet batch of schedules on me. I look at some of the Cincinnati Reds schedules that come out each season, and sometimes wish I was a fan. Each year there seems to be more schedules from the Reds than any other MLB team. Collecting Reds schedules could either be a blast or a gigantic headache due to all the covers, and sponsors. There is one set of schedules from the team I have been collecting, the Frisch's Big Boy. Each season there are three or four different backs to these schedules. Above is the front, and back of one of these schedules. 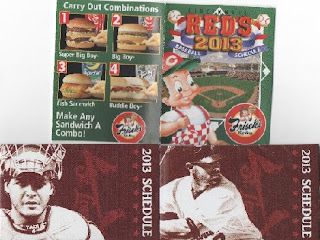 As you can see, included was a second back to the Frisch's Big Boy schedules. Along with the Frisch's was two different covers for the St. Louis Cardinals. For a short time when I was a kid the Cardinals were my second favorite team. They still have a spot in my heart which leads me to add schedules from the team when I come across them. This is the first time I can remember that the team put out more than one cover. Bank of America, and American Airlines usually does their own independent covers which are a much tougher find.

Clearing the bases with the slam was an envelope from Lou. Lou nailed me with four schedules one of which is a real tough find. 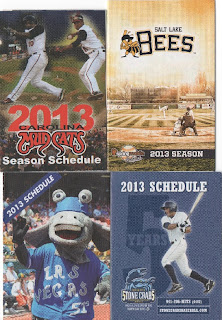 The Las Vegas 51's usually put out two covers with the alien being the first cover. In the past the first cover seems to disappear fast so is harder to come by. The remaining three schedules are teams I enjoy for various reasons.

Overall this was a great haul of schedules for the collection, and some for future trading.
Posted by The Prowling Cat at 2:00 PM