On Friday the wife was in contact with me about going, and doing something this past weekend. Deciding what to do we arranged for her co-worker to stay at the house, and watch the dog in-case we decided to stay the night someplace. Then on Saturday morning it was agreed upon that a trip up to Seattle for a Mariners game would be awesome. Past seasons we have always made it up to Seattle for atleast two games in a weekend series. In 2012 the streak was broken as it didn't happen. The steep price of gas when we had the weekend planned doomed the trip. All this meant is we were both ready to watch a game in Seattle.

Making the four to five hour drive up, excitement was building for our night away. The usual slow down in Tacoma that I call the 'Tacoma Crawl' wasn't near what it always is. This had to be a good sign that things were going to be great. Arriving in Seattle earlier than planned due to Tacoma being fairly easy to get through. We headed to the team store in the mall to purchase our tickets. Getting the section the wife prefers it was off to see if by some weird twist of fate we could check in two hours early.

Luck was still smiling down on us as they had a room ready so we could head up. Going in I was wiped from waking up so early so I needed a short power nap. While I napped the wife got to thinking about how it was soccer season. The lights in her head were going off as she thought it might be good to see if the Sounders were in town. They were with the game which had started at one. Thinking things through were decided to head down to the park earlier than originally planned so we wouldn't get caught in the traffic leaving.

Another bit of the luck that was ruling this trip so far hit again. We left an hour earlier thinking why not go to the brew pub across the street for a pizza, and the wife a couple beers. As we hit the parking garage a sign for thirty dollar parking made us both gasp in horror. As we pulled up the attendant asked 'what we are here for'? I responded back with a baseball game to which he came back with fifteen dollars. Sighs of relief hit both of us as I pulled out the money. After finding a parking spot it was off to get a late lunch followed by a stop into the ballpark team store. Once inside we managed to get something for both of us, and something for the daughter who was at the coast with the wife's sister. 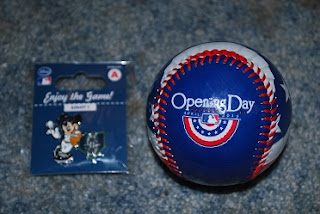 (Missing is the mickey in a Mariners jersey, dog tag we got the daughter.)

Finished with the store we had to wait twenty minutes for the gates to open. With rain pouring down we along with ten or so other people stayed under an awning on the building side. Once inside joy hit us both as it was off to our seats. Arriving at our destination I did my usual tour around the ballpark. I always like to walk the entire concourse level, followed by the short lower level, then the top level. One thing I enjoy doing on the top level is taking pictures of both the Seattle buildings, and the field from that view. With the rain coming down there was no city picture. 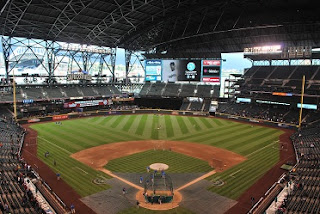 Another reason for the walk is I visit both information areas for schedules. The main concourse area always has the information brochures that I started collecting in 2008 as well. 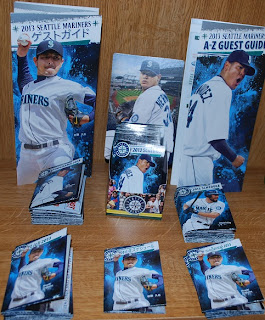 Collecting all my goodies it was time to head back to the seat. Grabbing a pop along the way which changed this season. They now have a sturdier cup which costs just under ten dollars, and you refill for free all game long. The cup was pretty sweet as it is Felix.

The game itself was great to. The main theme was military appreciation night, with flags, and bunting everywhere. I think it being opening week in Seattle was part of the reason all the stuff was still up, but I could be wrong. Either way it was an incredible sight to see all those flags along with red, white, and blue everywhere. 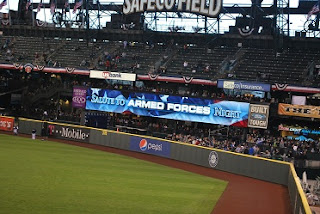 Unfortunately the Rangers won the game 3-1 getting two runs in the top of the 8th. After the game all of us still left were given what they call a Military Appreciation Coin. 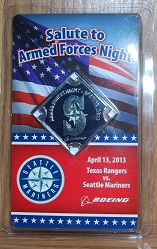 Overall it was just what I have been needing for a long time. For some reason I've felt a little down despite the fact we have a vacation planned for June. This game now has me re-energized, and ready to go. Another thing that had me excited was, the crowd was the smallest we've ever been to a game for. Any game we have ever been to draws over 30 thousand. Finally going to a game with just under 24 thousand was nice. No dealing with a huge crowd everytime you wanted something. Now hopefully things go great, and we can make it for another weekend in September. If not I'll be fine with having just this weekend.
Posted by The Prowling Cat at 1:00 PM