This Trade Was Fast!

After doing this blog for a couple weeks. I was contacted by Joe of The Sandlot for a trade. Seems Joe noticed that I'm a huge NASCAR fan. Having what he said was a bunch of cards from his days when he collected NASCAR, and a shelf needing cleaned off. The makings of a trade were done.

Sending him basically every Mets card I have. Missed a couple that were supposed to go, but got placed on the table and missed them. While I was throwing the package together I kept having just one thought. Through the years I've put a ton of cards in the recycle bin. Wish I would have come across this blog thing earlier. Maybe a bunch of those cards might have been saved, and found their way into a collection instead of whatever they've become. Hopefully they have become a Christmas card, or another baseball card.

Sending out my half on Monday the wait for a return was next. Then Friday as I arrived home, and ready for a four day weekend due to Christmas. The mailbox was jam packed with the biggest culprit being a box that honestly was three times bigger than anything I expected. Excited to be getting my second trade in two days I couldn't wait to rip open the box.

Looking through the box was kind of a blast from the past. Seeing a young Gordon. 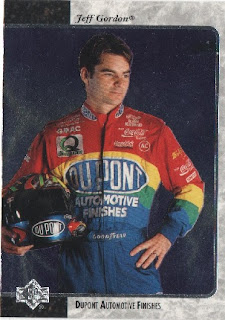 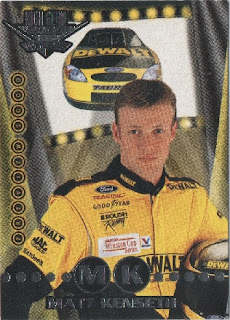 Some of my favorite guys from the various NASCAR shows.
Kyle Petty          Rusty Wallace     Darrell Waltrip

Little word of wisdom on Petty. The wife followed him on Twitter for about a week. The guy is crazy when it comes to posting. Even admits himself that he's a twitter abuser.

In finishing I'd like to send a huge thank you out to Joe once again. You got this racing fan very excited. Looking through the cards for this post even got me going more.

Posted by The Prowling Cat at 9:00 AM