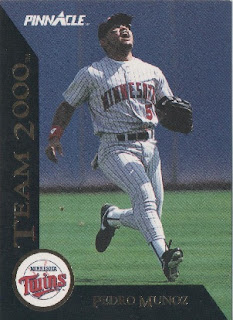 61 Pedro Munoz -- Playing only seven seasons from 1990 until 1996. An outfielder who started his career with the Twins. Munoz had an erratic career with numbers that bounced up and down every season. in 1996 playing only 34 games for the Athletics Munoz was out of baseball.
BUST 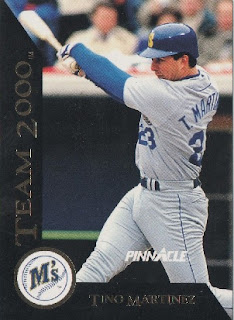 62 Tino Martinez -- A first baseman starting his career in 1990 for the Seattle Mariners. Martinez also played for the Yankees, Cardinals, and Devil Rays during his 16 year career. Traded from the Mariners to the Yankees in 1995 who had a big hole at first with the retirement of Mattingly. Helping the team win four World Series Championships while in New York. While his stats weren't flashy, Martinez had a knack for coming through in the clutch.
SUCCESS 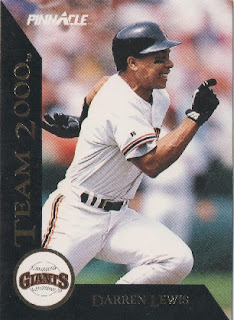 63 Darren Lewis -- Playing from 1990 until 2002 for seven teams. Lewis was known for his defense as well as base stealing. His defense was so stellar that twice in his career Lewis had error-less streaks of over 200 games. The longest of the two 267 games broke the all-time error-less streak. While his defense was great his plate appearances were forgettable. Hitting a measly .250, 137 doubles, and stealing 247 bases.
PUSH 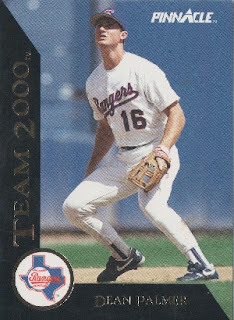 64 Dean Palmer -- Entering the league in 1989 and playing 14 seasons until 2003. Palmer was known as a huge strikeout victim. An all or nothing type hitter, Palmer hit 231 doubles, and 275 home runs. While striking out an amazing 1332 times during his career. His all or nothing hitting led to Palmer being the first Ranger in history to hit home runs in the first three games of the season. Later in his career injuries slowed down the third baseman, and eventually led to his retirement.
BUST 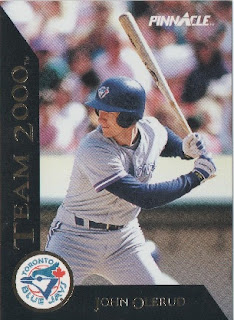 65 John Olerud -- Playing 17 years from 1989 until 2005. Olerud a first baseman was originally a pitcher in college splitting time at first and DH. Drafted for his play at first Olerud spent one season in the minors. Known as one of the best defensive players to ever play the game. His defense was so great that Sports Illustrated listed in in their all-time infield team. A great hitter as well Olerud is one of only 26 players to ever hit for the cycle multiple times. Olerud ended his career with a .295 batting average, 2239 hits, and 1230 RBI's.
SUCCESS
Posted by The Prowling Cat at 3:00 PM