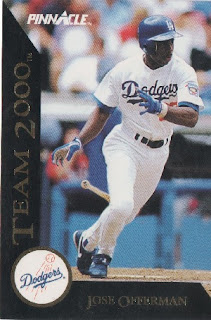 25 Jose Offerman -- Debuting with the Dodgers in 1990. It wasn't until 1992 that Offerman earned the job as the Dodgers starting shortstop. As the Dodgers lead-off hitter one of his career moments was Offerman was the first batter against the Florida Marlins. A poor defensive player but strong hitter Offerman was traded and released by teams due to this defense. Despite this Offerman was able to have a 15 year career in the bigs. His hitting numbers aren't flashy, but he was a shortstop which at the time didn't haven't big numbers.
PUSH 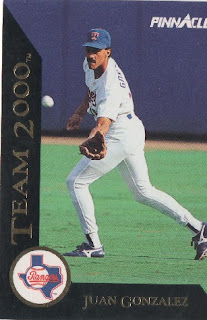 26 Juan Gonzalez -- A player known for his ability to drive in runs during his 17 year career from 1989-2005. Gonzalez was a line drive hitter, yet still hit out 434 balls for home runs. With the bulk of his damage coming from the ten year span of 1991-2001. During Juan's rookie season the young centerfielder had some serious competition for the starting spot. Feeling that Juan was the better future the Rangers traded Sammy Sosa and made Juan the everyday centerfielder. When his career was over Juan ended with 1,404 RBI's, and was a six time Silver Slugger.
SUCCESS 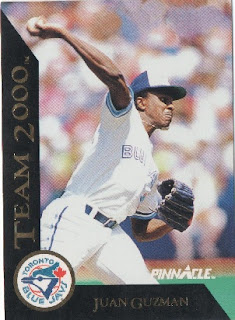 27 Juan Guzman --A pitcher who played the bulk of his 10 year career with the Toronto Blue Jays. Guzman was a very slow worker while on the mound. This led to Toronto fans giving Guzman the nickname 'The Human Rain Delay'. Despite the slow work Guzman led the league twice in wild pitches in 1993 and 1994. Starting his career strong Guzman was 26-8 in the two years before the 'Team 2000' set was produced. Afterwards Guzman went 65-71 for a career record of 91-79 with a 4.08 ERA. As with Gregg Olson earlier in the set. Grading Guzman's stats after the set it's obvious he was a
BUST 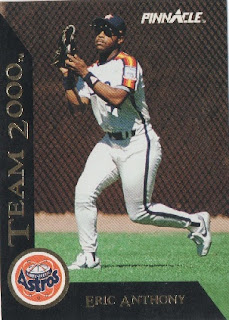 28 Eric Anthony -- Playing nine seasons with 5 different teams. Anthony was drafted by the Houston Astros originally, after an Astros tryout. The team spent a 34th round draft pick on the outfielder after seeing him display stunning power during the tryout. Tearing up the minor leagues with the same power the Astros were concerned about Anthony's high strikeout rate. Once in the majors Anthony became a starting outfielder. Two years later dealt for Mike Hampton to the Mariners. Anthony's career started to decline as he became a bench player. Playing in the MLB until 1997 Anthony moved on to Japan where he played for a season. Returning back after the season, Anthony spent two years in triple A before retiring.
BUST 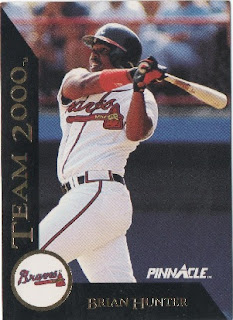 29 Brian Hunter -- Playing from 1991 to 2000. Hunter started his career in Atlanta before being moved to the Pirates after three seasons. The 1st baseman spent time in six different cities with a repeat run in Atlanta. Very limited time on the field led to what was a very disappointing career who's biggest career highlights were playing in the 1991, 1992, and 1999 World Series' with the Braves.
BUST 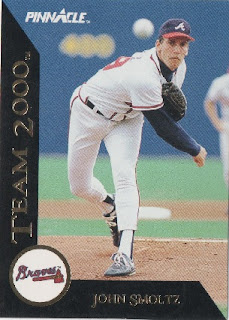 30 John Smoltz -- Playing in a 21 year career with the bulk of that as a Brave from 1988 to 2008. Smoltz was one of the key players in a Braves rotation that terrorized hitters in the 90's. Injured in 1998 Smotz made a move to the bullpen where he was just as effective. Saving 154 games during a four year period. A move back to the rotation followed where Smoltz was slightly less dominating but still effective. Suffering from shoulder soreness Smoltz moved back to the bullpen but not as a closer.  One of only two players to have a 20 win season and 50 save season, with Eckersley the other. Smoltz is currently the only player in history to win over 200 games and save over 150 games.
SUCCESS
Posted by The Prowling Cat at 11:29 AM