With two trade posts still yet to be given their true respect. I started to think about how I can't really move onto 2016 until these traders get recognized. How can I take steps forward in this new year knowing that there are still some loose ends from 2015 out there.

Working on solving that problem today I give fellow TradingBases member Stu his due. 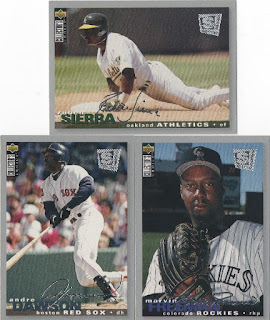 Stu sent a potpourri of goodies that ranged from the 1995 Collectors Choice SE silver signatures set that has taken some big hits recently. Not only did he send some cards for the set he sent some major players. Any group of cards that has Andre Dawson in it is a group I want to be part of. 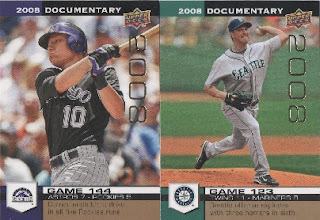 From there Stu kept it strong with another card to both the Mariners, and Rockies 2008 Documentary. 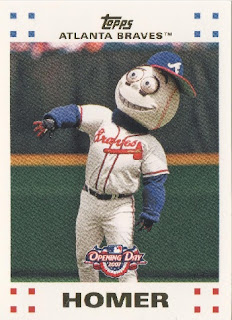 After those two cards though things went real weird in a hurry. While it is a known fact that I am one of those people that loves me a mascot. Looking at Homer he appears to me to be stoned or something maybe much worse. I can't help, but wonder if many a kid couldn't sleep at night after seeing this card. Its given me nightmares that I'm still trying to cope with. 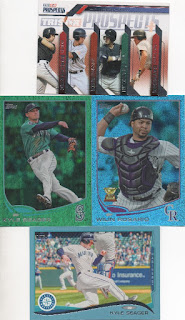 Closing out this excellent batch were four cards for the player collections. It'll be interesting to see Franklin will ever turn into the star Seattle, and now the Rays wanted him to become. Seager on the other hand has started to cement himself as quite possibly the cornerstone of the Mariners. Getting the long term contract he did was a smart move in making sure he stays for many a year. As I've said a few times recently, and will once again here. Rosario is a free agent looking for a club, and will hopefully find one. Bleacher Report listed him as one of the top free agent if not the top catchers still available. Question is how many teams are looking for a catcher?

Stu thank you for some amazing cards that will fit perfectly into the collection.
Posted by The Prowling Cat at 7:30 PM