With 2016 still in its first month you can only imagine my excitement when the wife gave the clear for me to hit the Mall 205 card show. Originally I was undecided on whether to go or wait until another couple months before making the journey. After arriving I found that it would be a great show for the collecting. 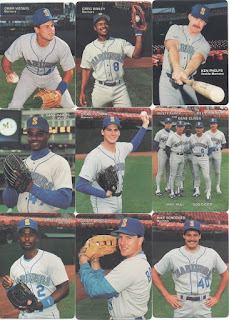 Starting things off were some Seattle Mariners cards from what believe to be one of the stadium giveaway card sets. The cards above are just a small sampling of the cards I got from a couple different years of these. At ten cents, or 15 for a dollar I wasn't paying attention to the deal. Sadly it cost me as I should have just cleaned all of these out, and then seen what I could do about finishing them eventually. 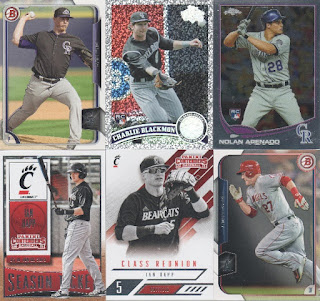 Second up came the players I collect cards. Gray, and Blackmon aren't currently on the list of players I collect, but odds are they will be in the near future. During guys weekend in Seattle, Gray took pictures not with just myself, but a few others as well. He seems like a classy guy that made a fan out of this cat.

Arenado, and Trout are mainstays on the player collecting that I don't see going anywhere soon. The Ian Happ cards were just something I saw, and as a fan of the Bearcats just ended up buying. Ironically Happ played for the Emeralds last summer. and I knew this, but didn't think about it when buying the cards. 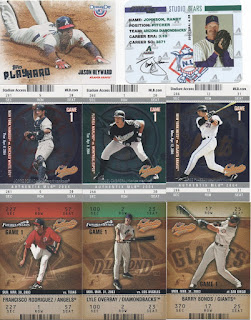 From there the set needs got some loving as well. Much like all the player cards above these were all bought for either ten cents, or a shiny nickel each. Hitting some Authentix was possibly my favorite find of all the cards on this post. The 2004 Studio Stars is something I need to get a list together for in the near future.

Overall it was a great show, and was fun to run into Rod from Padrographs who I hadn't seen since our first meeting. We talked for a minute as he was on another mission. The above cards weren't the total extent of the purchases from this cat. Next up will be some fun cards that I was so pumped to find.
Posted by The Prowling Cat at 7:44 PM