Over the years of collecting I have enjoyed building sets of prospects. While most of these guys never make an MLB roster they have been fun little sets to build. Recently though the world has been watching this guy playing for the Wilkes-Barre Scranton Rail Riders. I'm going to go out on a limb, and say you should be looking for this guy in a Yankees uniform soon. Even though I'm not a Yankees fan even I've had to stand up, and pay attention to this guy. 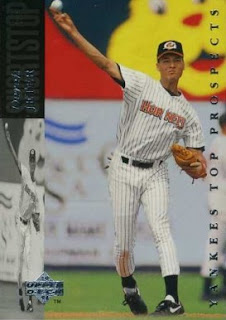 He has only been in Scranton for a short period even the card company lists this man as a Yankees Top Prospects. Just for those looking to see what other cards are out there for this big prospect. 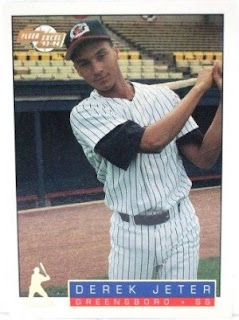 I may not have a great history at picking guys who will make huge impacts in the future. Right now he might not even have the best stats for his team. I will say though that I have a feeling that this prospect is worth taking notice of. One day he's going to be a hall-of-famer I just feel it.
Posted by The Prowling Cat at 1:00 PM